I don’t eat meat and I feel fine. I must admit I didn't think much beyond that. Well, I thought about iron; vegetarians can get a bit deficient and I have been known to be refused for donation by the blood bank. So sometimes I take supplements to sort that out! But I had my sister on the phone and she warned me about vitamin B12. And I then had a bit of a google. And I agreed I probably was well advised to increase my intake. Unless you eat unholy amounts of marmite, you might not get your recommended dose if you don't eat meat. And I do eat marmite but in modest amounts. And I do consume milk and that gets me quite far along the way, but better to be safe. So I ordered some supplements!

A few days later they appeared. Two tubs of B12 and one of folic acid. The tubs surprised me. You could fit all the B12 pills in one tub ten times over. And folic acid? I hadn't ordered that. I pondered sending it back but it seemed a bit much faff for a few pounds of supplement. I'll keep it! I associated the stuff with pregnant women and I am not one, but some more googling revealed we all need the stuff and using a supplement is not likely to do any harm. So now I have vitamin B12 and folic acid with my breakfast! I don't expect to notice the difference, but I do hope that I avert changes taking place in the future due to NOT taking these... 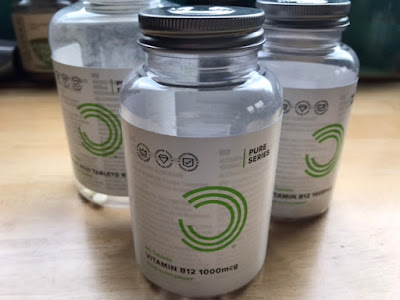