Last week I had decided to go digging and not go with the Thursdaynighters. But this week I decided I should do the opposite. David had had a hard week which involved his mother and health issues, and Mick had been in hospital for another check. A calm night with some socialising was called for!

Paul picked a small mine quite far south. I'd not been! Few of us had. On the day I drove down on my own. David was coming from his mother's place, and Ed was out of the country. While I was driving I noticed I was behind Paul. That's nice! That meant if I wasn't sure of the way I could follow him, and I wouldn't be the first person there and on my own. But he seemed a bit unnerved about this person tailgating him; in Penmachno he pulled over to let me pass. But I got out to show it was me. Then he was fine with me tailing along! And it is a beautiful route, even in the dark.

When we got to the final junction he indicated left. I was sure we had to go right so that's what I indicated. Again Paul pulled over. We discussed the matter and decided we each go our way; it would become apparent quite soon who was right. I went right and soon found the parking lot. Success! But I was the first.

Minutes later Paul showed up. I was trying to decide whether to wear full caving kit, or just slip on some fieldwork waterproofs. It was quite cold! I wished I had my caving hat, but I hadn't managed ot locate it. I settled for the waterproofs.

Then, pretty much on one go, three more cars appeared. I didn't recognise the first one! But the others were Jason and Miles. And the first turned out to be David in his mother's car. Mick had texted he would be a bit late.

After a while we were all ready to go. It was pitch dark, of course, but we sort of knew what direction to go in, and soon we found spoil heaps. A while later we were in. It was a nice little mine. It had nice precipitates all over the place! We walked in and explored to the end. It was a rather dry chamber. We sat down for soup! And Mick told of his hospital results, and of the latest developments in his extended family.

After soup we had some cake David had brought. And then we went out! It was a lovely night. The wind that had been quite strong when we walked up had died down. It wasn't very late!

Most people went to Mick to have more beverages and cake, but I went home. This was a chance to be in bed at an acceptable time! It had been good to reconnect with the Thursdaynighters again. But next week I hope to be digging again! It's time we make some progress in there... 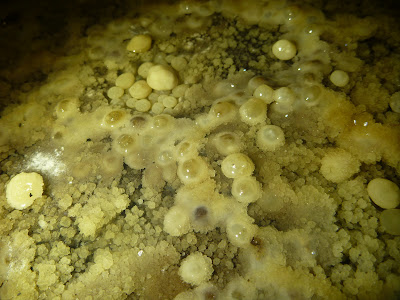