Cwm Bychan with the ThursdayNighters

It wasn't a Thursday at all! But it was Easter weekend and people had spare time. And Mick had suggested scampering up Cwm Bychan and looking at the levels there. And I like Cwm Bychan! I had been there with my dad and stepmom. But then we had not explored the levels there (evidently). Now we would! To a certain extent. I had done enough lugging stuff around the previous day so I didn't want to bring wellies or the likes. I brought a helmet + light, and gloves, and some warm clothes, and that was just supposed to be enough.

I drove to Edwyn. He was getting rid of a pannier rack and pannier, and if I teamed up with him I could have a look at them. I intended to fit my bike with such as it's a bit of a pain to carry everything on your back. I threw the bike in the back of the car as that would be the best way to check for compatibility!

When we had doen the bike stuff we set off. We met David at Sigyn (we were doing a two-vehicle trick, so we didn't have to walk a loop) and together set off to Nantmor. There we met Mick and Don. Mick was in contemplative spirit! His health wasn't good, even by his standards. Oh dear. Don was feeling the years but was cheerful as ever.

We set off. It's a beautiful route! And the weather was lovely. Soon we got to the aerial ropeway. And we started to look into adits! They were rather wet, though, and nobody was keen to get soaking feet. So much for exploring. 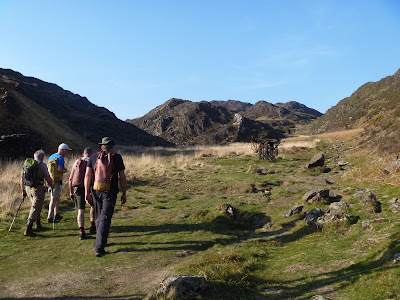 Walking to the top of the aerial ropeway in the sun

We also looked in the stope above the big spoil heap (by the standards of the valley). That was quite big! We should come back with drills and bolts and SRT kit and whatnot. Now we had nothing. But we walked on. We saw a few more adits or almost-adits. One was wet too! But you could see the end of the wet bit. That was tempting! I decided to go for it. I swapped my boots for my sandals and braved the cold. It hurt! But I got through. I took some pics inside. Then I had to go back the way I came. Ouch! 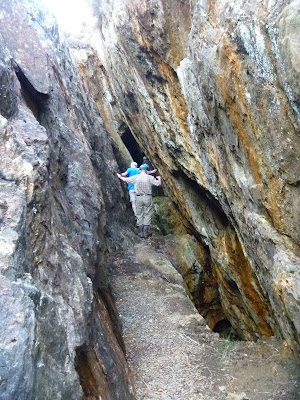 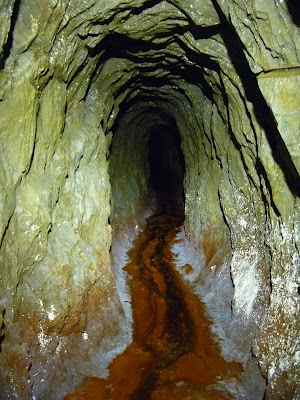 The adit I explored in my sandals

I changed back and we walked on. We got to the bit beyond the pass where there is a lot of mining stuff around. I clambered up to a stope there too. Then we went onwards to find a level we had seen from a distance. But we got separated! Edwyn, Mick and me lost David and Don. After a while we saw them in the distance. We let them do the exploring. I was feeling my feet! A relic from the previous day. 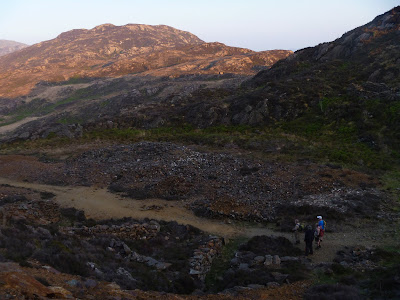 A big flat space with mine waste near the pass

We rejoined and headed down towards where the car was parked. There was a hole in the hill somewhere there we wanted to see. But where was it? And would we have enough daylight? It was getting dark now! David saw a spoil heap and headed for it through the shrubs. And then reconsidered. But we went on, and Edwyn and I tried again a bit further on. He was ahead. I saw a hole in the ground he had walked past (I thought on purpose; it turned out he hadn't seen it) and couldn't resist crawling in. It went! More stopes. And more reasons to go back with kit. But we shouldn't linger; the others hadn't followed and were waiting for us. 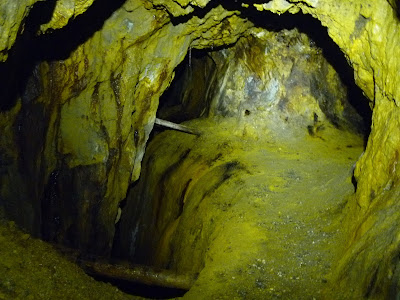 In the dark we walked back to Edwyn's car. He drove us back to Nantmor, where the other cars were. And then we headed home! And I was in bed almost at normal bedtime. It had been nice! A nice walk, the luxury of two vehicles, good company, and some enticing exploring prospects (in random order). I like this Easter stuff!
Posted by Margot at 07:31