When you move house you may as well move phone as well. My old one was due for renewal in November; by then, it still worked OK. I chose to keep it. The Samsung I got with that deal was put to use as a stereo.

But these phones are not built to last. The battery would just not last a day anymore! And it had had an issue in which it gave me an error message all the time for months. It was time to make the switch after all.

As I would be pottering between two houses, only one of which having Internet, I would be rather reliant on my phone! So I slowly prepared. I didn't want to lose important data! 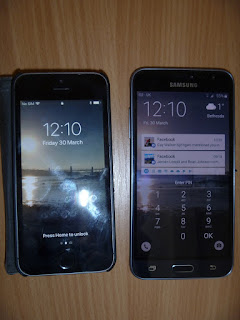 The day I got the key is swapped over the SIM card. And I managed to transfer over my contacts. I synced other data via iCloud too, but I haven't yet managed to actually use them. It's all hidden! But I'll get there.

I'll have to get used to the Samsung-specific things.  But there's one thing I already like: you can easily swap between languages! It's very annoying to have predictive text try to turn Dutch into English.

I now have English,  Dutch and Norwegian loaded.  Welsh was not on offer! Tsk...
Posted by Margot at 09:24