Four years ago I entered the world of smartphones. I haven't looked back since. It's great to be able to handle a few emails at home without switching your entire computer on. And... and not much more. I soon got into trouble with my apple ID. And in the end, the model was too old to be compatible with everything I might want. And the battery started to run out fairly quickly. I had already decided last year I should get an upgrade, but it always dropped down my to do list. I was still scampering around with the somewhat battered iPhone 3!

Then I had this meeting with Nora in town. I had nothing urgent planned afterwards, so I figured that if I wanted anything done in town this was the moment. So I went to Carphone Warehouse. And just asked if I could get an upgrade like that. And I could! I didn't remember any of the details of my contract but they just conjured them up from the system. The chap was very patient with me. So without any preparation I walked in and with a new phone for no extra cost I walked out. Success!

Was it that easy? Well there still was this issue of the apple ID to sort out. When I got home I sat myself down and tried to sort it all. With remarkable success! I managed to sort out the apple ID issues, and start backing up my old phone. That would take a while; I left it overnight. 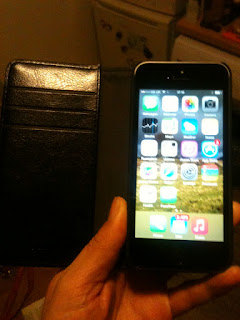 The next morning the backup was complete, so I could go and transfer the data to the new phone. So I did! The new phone was a lot quicker getting the data than the old one was sending it. Then I tried to get access to my email. My gmail account was sorted in a jiffy. My work account was more faff. But quite soon it was loading the lot! Later on I realised that maybe mail was coming in, but it wasn't going out. More faff! But that was sorted soon too. And then mail stopped coming in again. Another app sorted that.

The biggest frustration was the contact list. I had saved the contacts of the people I had exchanged texts with since buying the phone, and I had tried to delete these first and then copy the lot over from the old phone. But accidentally it went the other way! So I only had some three contacts left! But fortunately all my messages had copied over. I spend quite some time manually saving the contacts from these. Unfortunately, the settings were on "automatic update" so all that work was wiped at the first update. Shit! I toggled that function off and tried again. So far so good!

When it was all sorted I could add all the sort of apps that make a mobile phone better than just a phone with email. Live train updates, a Welsh dictionary, a running route planner... the stuff that makes things easier and more efficient. Look at me, being all modern!

This did mean I spent a large part of the day on the bloody phone and whatever came with it. Boring! But sometimes useful! And when it was a dull day anyway (with atrocious weather too) I decided to do a few more chores. Check out what that warning light on the dehumidifier means, buy some shirts to replace ones that had started to show too many holes, find a solution for an iPod problem (there's a theme here), buy another pair of running tights. So it may have been a dull day but I think I'll benefit from it for a long time!