When you remove radiators, you know you have to put them back one day! And I had decided the Saturday after the painters had done the bulk of the work would be a good moment for it. Phil had helped me remove them (well, he had removed them while I watched) but I had paid attention and taken notes and I figured I could put them, or others, back. And I had also decided I would replace the removed ones, and also the ones on the top floor. It's chilly there! So I had measured the radiators in situ, and the space between the pipes of those removed, and had taken notes.

And on Saturday I would go to B&Q, buy the radiators, drain the system, plonk them in place, and refill the system. Easy! Is it? No it isn't; not if you're some micropalaeontologist who is not hindered by many plumbing skills. But it went wrong (or at least; difficult) before I expected it to.

I had seen my boiler had slightly low pressure and wanted to do something about it. And I needed to know how as you have to get the pressure back up after draining the system! And in the olden days that had been fine, but then the plumber had replaced my filling loop with something. He had pointed it out but I had forgot. Oh dear! Now what? I thought I should drop him a message, with a picture of the boiler and its piping, and ask him. But that proved difficult. For sending a text you need a phone with a SIM card. I have that! But it's a bit crappy, and can't take pictures. So I took a picture with my old phone, emailed it to the new phone, didn't manage to save the pic, tried to turn it into a picture message, buggered it all up, and got a bit frustrated. But the plumber didn't turn out to need a picture; he texted back before any picture could have reached him. I cope better with people then technology! And his explanation was crystal clear. I had been looking at the right lever but I had seen it won't rotate. At least, not around a vertical axis, as I had been looking for. But it could hinge around a horizontal axis! Success!

With the boiler sorted the easy bit came; buying the radiators. I got to B&Q at a decent time. And they didn't have the right sizes. Hmm well. There's Screwfix too! So I went there. And they didn't have them in stock either. They had one. I took it. And you got some funky valves with them. OK! I ordered the rest; they would come in the next day. And I figured a Sunday afternoon is a bad time to do clumsy plumbing; few shops that sell plumbing stuff are open, and most plumbers don't work. But the week after we'd have an Open Day so that Saturday was not good either. And during the week is a bad time too! So I went for it. And I decided to at least have a look at the radiator at home. And the brackets. And such. I could start with the one, even without draining the system!

I went home and unpacked the thing. Hm. How would it work? I read my notes. And at the documentation that came with the radiator. And the funky valve. And I sort of got everything assembled. I think! And the brackets were pretty much the same as those of the old radiators. Could I use the same drill holes? No, it turned out. And what was worse; I had stupidly assumed the radiator is as wide as the pipes are apart. But there are sticky-outy things in between! So the pipes are some 10cm further apart then the radiator is wide. If it fits. But now it didn't fit. Shit! And then I lost all appetite for plumbing. The pipes need adjusting! And I can't do that. On Monday I would phone the plumber to see if he would be willing to come back and do it for me. I hope he has time! This stuff cost me so much time and I have little. I had a pile of marking still waiting for me! And an exam to finish! And the painter would be back after the weekend; I wanted to do some more filler work before that. And I actually also wanted to hang up curtains. And a towel trail. And some shelves. And whatnot! But that was clearly not all going to happen. And a walk in the beautiful snowy mountains most certainly wasn't going to happen. Oh well. I can wait a while! Who needs radiators? 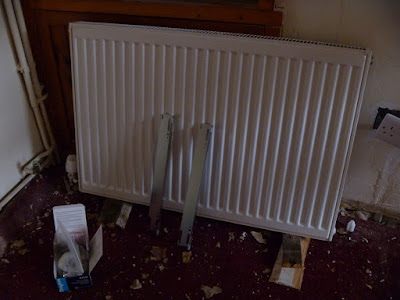