Many months ago when I was still working on floors and ceiling one of the Thursdaynighters commented with something like 'ah! you're doing up the house? Sorting out soft furnishings and stuff?' And I wished then it was true and I had reached that stage yet! But by now I have. The painter is as good as done! So I can hang up curtains and such. And with the light fixings in place I can add lampshades. And now the painter won't take them off again as fast as I put them up. As happened so far!

I sorted curtains for the living room as soon as the last bits of patching up of the walls were done. When I wanted to hang the rods up I had noticed the plasterer hadn't plastered all the way to the beams. So I brought out my filler, did something about it, and then saw the painter had touched up the paint. Success!

Later I also added a curtain to the front door. It's an ugly white plastic door in a beautifully and colourfully painted room! And a curtain will help keep the warmth in too.

I also found a lampshade that went with the colours and wasn't very heavy (remember the light fixings). It is starting to look like a house! And when the big things have been done I should hang up some pictures! And then it all comes together... 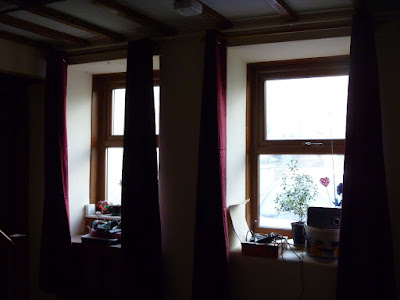 Curtains tend to reside near windows so be backlit! Oh dear. Notice as well the tools in the window sills: it won't stay that way! 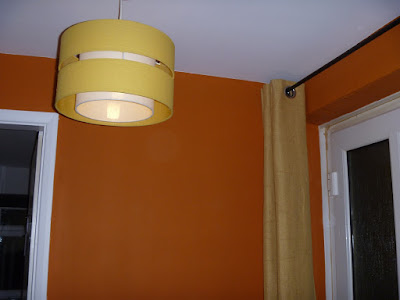 Look at me being all domestic. And notice the seventies vibe!
Posted by Margot at 08:27