The house is not really one of those immaculate ones! It has lots and lots of rough edges. And the storage space was no exception. Rose had had a freezer there, and when I removed that I saw that both underneath it and behind it it had left its mark. Rose had painted around it! And there was a big stain on the floor. And the moisture that had caused the stain had damaged floor and wall. And there was no skirting board there. It had clearly been there once, but no more. Maybe it had started rotting?

I had not really intended to do much about it but when the painter came in and made everything look great I got my act together and decided to make some effort. I first fixed the floor with polyfilla. Then I fixed the wall with powder filler. And painted over that. And then I added skirting boards all around! There was quite some missing. And I had practised upstairs. And while I was at it I removed some redundant wiring and painted over the scar that left. I And in the end it actually looked quite good! I think it had been worth it!

And while I was at it I did the conservatory too. I'm getting experienced with this! 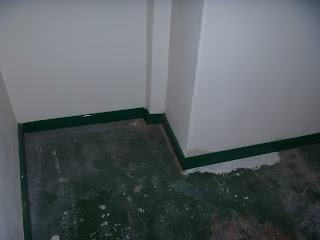 Of these six bits of skirting board, only two were there initially, and the rest I added myself. And notice the repairs on floor and wall.
Posted by Margot at 09:58