There is a doorway to the living room. And there also is an old one which is not currently in use. Either Rose or an earlier occupant turned it into a cupboard. Or rather, two cupboards; one in each room. It used to lead to the other doorway-turned-cupboard I sorted out before. And I hadn't notice anything special about it. I had seen it had only two of the three expected planks in! I assumed Rose had just wanted to put something so tall in that it didn't fit underneath the bottom shelf. But I found the shelf in the garage and decided to put it back. And noticed the support it would have to rest on wasn't very well attached to the wall! Aha, that was the reason it wasn't in position. I prodded the other supports a bit. They were quite loose too! They had just been hammered in rather then screwed. Oh dear, I had something to sort before the floor would be laid. I took out all shelves, pulled the supports out of the wall (with not that much effort), and then decided to remove the woodchip wallpaper that had still survived in this corner. Then I drilled out the pre-existing holes so they would be big enough for plug and screw. And then I painted it! The painter had left quite some of the magnolia paint. And then I had to put the supports back. I wasn't pleased I had felt the need to add this to the big DIY list but well, it felt good ticking this off! 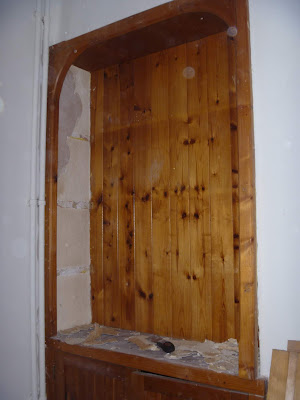 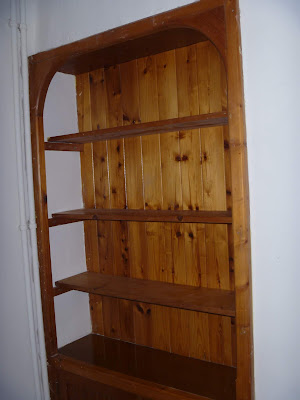 The end result
Posted by Margot at 07:23