I am a bit suspicious of ThursdayNighter trips. They tend to end late! And other people cope well with a lack of sleep but not me. So when one week we would go play on the ziplines in Cwm I did commit to joining, but I was a bit apprehensive. I made sure to drive myself; the other had been talking about a kebab after the trip! The last thing I need.

When I got to the parking lot, many were already there. Including Kate (aka Bob, as Blackadder fans will understand), another of our PhD students, who had been attracted to this sort of stuff by Ed's stories. She shares an office with him. It was nice to have her there! And the other Kate wasn't there so we didn't really need to call her Bob but well, we could.

Ed had an idea of a route. We would start at the catwalk. Then drop down and do some zipwires. I had made sure to bring extra Cwm-compatible cowstails: you need them long and with big karabiners. The handline of the catwalk hangs high and I can't reach it with my normal cowstails, and you want to hand the karabiners over your pulley on a zipline.

I started on the catwalk. Only slowly the rest followed! And in the level before the drop Edwyn overtook me; he had the rope. He went down, and then me, and then there was a bit of a wait. I had some tea, and a sandwich, and an apple, and I noticed there were actually steps going back up. I think these may have been new! I clambered up. One of the blokes wasn't keen on rope pitches and he came down them with me.

When we were all down we asked Ed where to go next and what it would be like. He didn't know! He had only seen the map and had been curious. Oh well! So we followed the map. It too us down a chamber and then to the first zipline. I went first. I could hardly reach the floor so I couldn't have a run-up! And I didn't reach the other side. I hand-over-handed to the end. Jason followed and did the same. Then Chris had a go. He is heavier then us and he crash-landed on the other side! Edwyn managed to find the goldilocks point of getting to the other side at speed but landing with elegance.

We had fewer pulleys than people so we sent a few back. When we were all across we started on the next zip. Brian started and crashed into the other side. Oh dear! Chris did the same. Then it was my turn. I didn't dare a run-up, even though here I could as the wire was lower! But you guessed it: I was overly cautious and didn't reach the other side. I hand-over-handed to the end. Jason followed and did the same. And Edwyn Goldilocked it! David did too. Bob and Ed had avoided the ziplines.

We were now back at the inlcine, and there we found Ed and Bob again. And the group decided to go to the Corkscrew and have some more fun. But I saw my chance! I decided to bail out. I could be in bed at a reasonable hour! And wanted that. So I said goodbye.

I came out into the moonlight. Lovely! I took a picture while eating some more fruit. I used a 60 second exposure time so that could happen simultaneously. And then went back to the car, and drove home. And the next day I heard the others hadn't got back to the cars until around midnight. I had made a good call! But next time I do these zips I either take a run-up after all, or ask someone to give me a shove... 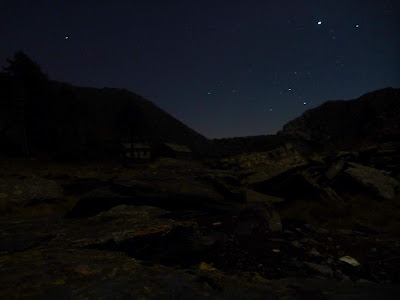 Looking at the Manager's office from near the entrance