Doesn't DIY always throw up new challenges. The electrician had rewired the place and left ceiling lights dangling from the wires, and the plasterer had plastered around them. Now the wires were sticking through the freshly painted ceiling plaster. And I thought I'd just properly attach them! How hard can it be? But the answer would become clear.

With the light in the landing I decided to turn the fitting in such a way the screw holes were where the gap in the plasterboard was the narrowest, and screwed small screws straight into the plasterboard. And it held! For now at least. 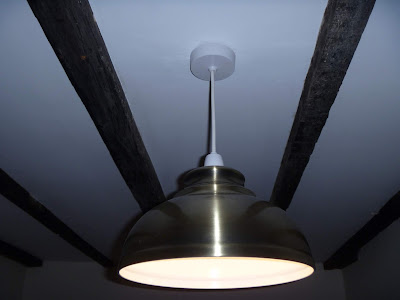 Next: the hallway. There the hole was rather big. I decided to largely fill it with polyfilla, and sick a plasterboard plug in the wet stuff. I wrapped the wires in toilet paper to avoid the polyfilla sticking to that; I didn't want it break off as I moved the wires around. I let it dry and had a look. It seemed to have worked! A plasterboard screw went into its embedded plug, and the other screw hole was done with another small screw straight in the plasterboard. And that held! At least for now. 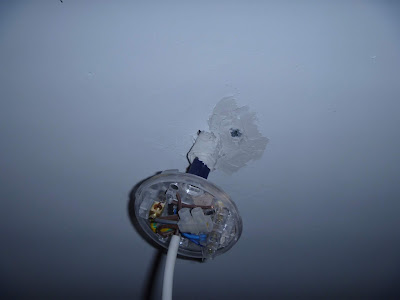 I then had a look at the living room. (The master bedroom and staircase weren't needed as the ceiling hadn't been removed.) And there the plastered had done some trick! I could see there was some wood behind the plasterboard. Had they stuck a slat in to aid in something? Whatever the reasoning was; it helped me. I could place one of the screw holes straight over the wood! That sorted it out. Small, by now traditional, screw in the plasterboard for balance and symmetry and Bob was my uncle. Sorted! A bit quicker than I had started to fear after the first crumbling plaster-incidents. But I now have to make sure I don't choose heavy lampshades!
Posted by Margot at 07:35