I had been in charge of an Open Day before. It is quite a responsibility! In these hard financial times you need to get every student you can get. But now for the first time I had to organise it too. Even more responsibility! I was a bit nervous about it. I was afraid someone would come stomping towards me demanding to know why a certain thing hadn't been organised, and me not being aware I had had to do that. But generally these fears are not quite justified. And they weren't!

I am used to sort Peer Guides as I've been doing that for a while. But now I had to herd cats, and make staff come up with demonstrations to do with prospective students. And it worked!

The day came. I had been pondering how to go about things. How long would I let the students do one of the demonstrations? How would I balance the marine biologists and the physical oceanographers? Should I send people to the boat? I decided on something. And hoped for the best.

On the actual day I was early, and so were Mattias who organises the autumn Open Days, and David the Head of School. We sorted some last minute things. And then the peer guides came in. I assigned them groups of students. And when the guests actually arrived, and we knew who had registered but not turned up, I updated the groups and told the peer guides who they had. I knew I didn't have much time. And because the guests were early I couldn't brief the staff as they all arrived at the same time. That was busy! I also had to tell peer guides and staff to go into the lab at the right time. Preferably through the right door (that failed).

During lunch I just talked to people about studying here in Bangor. Then I had to make sure everyone was where they were supposed to be. Parents in the new building, and the groups with their peer guide. That went a bit messy. Better next time! But we had got to the important part: mini-practicals for the the prospective students. We had five stations where groups of them would either determine the age of a cod, or get their hands on hermit crabs or brittle stars or whatnot, or create an internal wave in a water tank... lots of fun to be had! I had been on parent (and other companion) duty before myself. It's fun; you just have a chat. But these demonstrations are fun too!

The prospective students swapped to a different station three times. And then basically it was all as good as over! And it had run so well! Except for the few hiccups of people getting in each other's way. That'll be easily sorted next time! I have faith in it now! Bring on the next Open Day... 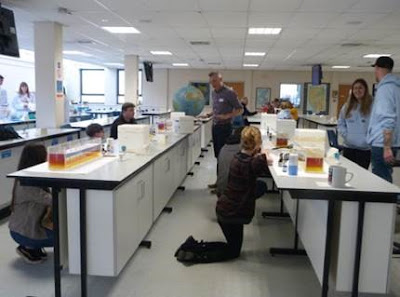 Prospective students admire their internal waves with Dei and some peer guides looking on. Pic by Nicky