I'm so glad I didn't try to paint my own house! It took the painter a lot of time. And he does it professionally. He started on the old house, then moved to the new house, and then went into the periphery; the conservatory and the storage space downstairs. But that became a bit tiresome; the thing is, I had taken the landing into use as a living room; the living room had to stay empty because I was still working on things like the ceiling, and the joiner would come in and lay the floor; the master bedroom should get a carpet soon so that's not ideal for putting things either, the bathroom and hallway can't hold much, so where to put stuff? I like to keep the top floor decluttered so I have a bedroom and home office in which I can escape from the building mess, and the kitchen is in use as well. So he managed the conservatory by just shuffling stuff aside, but then the storage space... I mean, the name is already a bit of an indication of why that could be a problem. I have a wardrobe there, and my deconstructed book cupboard, and a lot of shelving for stuff. And a show rack, a trunk, and lots of boxes and bags.. And curtains. So where to put all that?

The painter went with moving the bags and the shoe rack into the living room, and basically just covered the rest, and shuffled it around to be able to get to ceiling and walls. But he wasn't happy with that! He couldn't swing a cat. And he will have to do the floor as well one day. That really is best done in one go, but then the place has to be empty! Where to put the stuff? So we agreed he pause a bit now, and wait for the joiner to come do the living room so we can then put stuff in there. He will have to come back then anyway; the living room will only have skirting boards by the time the floor is laid, so that has to wait for the joiner anyway.

So all is painted now except for the floors of conservatory and storage, and the living room skirting boards! It's lovely! 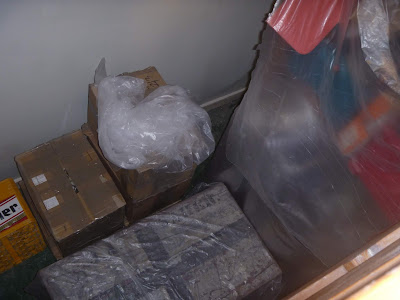