The conservatory is a bit lower than the adjacent bedroom. There was a wooden step to bridge that difference. But that was a bit iffy! Even the house surveyor commented on it. I hoped he would rather look at the bigger picture, but I couldn't deny he was right. But it was low on my priority list.

When I was emptying the conservatory for the painter, I pulled out the step. Time to turn that into firewood! I saw that behind it, there was some rotting skirting board. That went too. I later bought some new skirting board; that was lower than the old stuff. So I painted where the skirting board had been. And then put the new skirting board in place. And I had had my eye on a beautiful piece of slate I had found in the garden (although not one of the ones pictured; there was a third) for a new step. And I would have to lay it down on some supports. I figured I could saw off some bits of the big beam Phil had pulled out of the ceiling! And so it happened.

It was easier than I thought to put the big block into place. I 'walked' it over the grass to the door, and there lowered it onto the door frame and the dolly I had got ready on the other side. Then I just wheeled it to the supports and removed the dolly! Job done! And it's a recent conservatory (this millennium) but I still think this old slate slab looks good in it. And it will last! 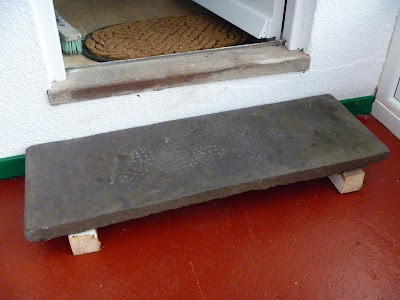