It's nice and relatively warm underground when it's frosty outside. So just keeping mining is a good idea! As long as you can get to the entrance. And that doesn't speak for itself. If we are in the Blaenau area we have to cross the Crimea Pass, and that closes in bad weather, and even if it doesn't close, it can be quite slippery there; if we are in the Gwydir Forest, we have to drive on a narrow, steep, bendy road that doesn't get much traffic and doesn't get much attention from gritting lorries. And these are the most often visited areas.

When one week it was very frosty and snowy the ThursdayNighters decided to not go underground. But the day after, when the roads were predicted to be better, they would go into what is known as Bacon mine, as we tend to make a campfire and fry bacon there. But this time, Phil would bring pheasant! And he hoped the gathering would be hungry as he had quite a lot of it. I decided to not go; I was knackered, and I had the heavy responsibility of the Open Day the day after. But I was sad about it! It sounded nice. And with special guests; Phil would bring his dog and David his daughter.

The day after I asked Phil if those present had managed to eat all the pheasant. And they hadn't! I didn't mean it like that (honest) but he offered me two left-over pieces. Well that sounded nice! I don't normally eat meat, but this was an exception. Free-roaming, non-threatened creatures. Bring it on! So as I was in town anyway for the Open Day I popped by to pick them up. The dog was a bit miffed I walked away with such lovely snacks, but I ignored that. And it was great! I felt all posh when I had such a funky dinner on my Saturday night. It was really nice! And I even managed to cook it satisfactorily. And then again on Monday! 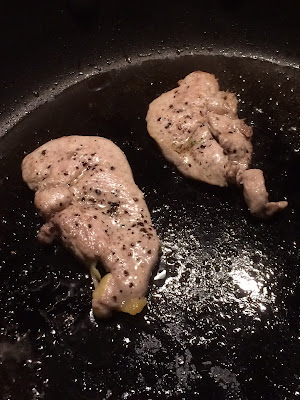