All ready for the joiner

When the joiner comes in he needs the living room empty except for the floorboards lying ready for him. So that meant getting rid of the stuff the painter had put in it to get it out of his way. And then get rid of the working platform I had used to get to the ceiling. That also meant I had be be done with it! But when I decided the ceiling was OK I took it apart and put it in the garage for now. And I pulled the carpet up. And the underlay. And I swept the floor. And now it is all empty and clean-ish and I look forward to it becoming a proper room so much! It's been almost ten months without a living room! And I like having a living room! 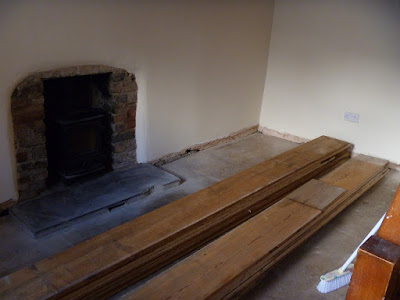