Unexpected meal from my own garden

I had wondered if I would ever have a full meal of veg from my own garden! The cabbage is doing well, but still not cabbage-shaped. It's just loose leaves! And the slugs get to the courgettes first. I did eat one; this wasn't slug-eaten, but the end was getting slushy so I decided to eat the rest before the whole thing would turn to mush. An I have chard in containers but you need half a garden full of the stuff before you have a full meal. At least in my experience!

I had hoped, early on, on a meal of peas, but you need loads of them for that. I had so far just harvested whatever peas were ripe if I was having a meal (say, Thai Green Curry) that would be enhanced by a handful of fresh peas. That was nice! But not the same. But one has to appreciate what one has. So one day I was about to eat spaghetti, and the sauce would benefit from some peas. So I set out harvesting! And then I shelled them. And the pile of peas kept growing! So by the time I was done it was clear I should reconsider my meal ideas. And I put the spaghetti back where it came from and boiled potatoes! To have a plain potato-and-veg meal, but with home-grown peas. I was chuffed! It finally happened, when I wasn't expecting it! 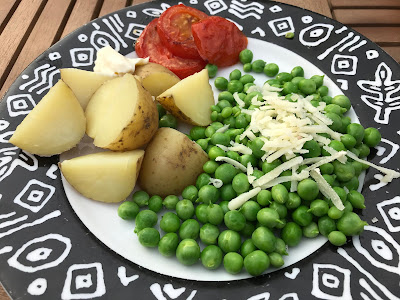