I had tried some locally bought glue with small gravel to make my stairs into the garden less slippery. I hadn't been convinced! The glue stayed a bit bouncy. I could imagine the gravel just popping out. That's no use! So then I thought I go with the original idea: epoxy. But I don't know much about epoxy. Are there different kinds? Which one do I need? But I decided to try. The stuff can be really strong! I looked around on internet for a bit, and decided to buy a reasonable amount of some epoxy with a description that fit my needs. When it arrived I set out to do another plank trial.

It's a lot more faff than with the glue; you have to warm it up and mix it and brush it onto the wood and somehow manage to clean the brush. And the problem was that you really need to get the proportion right; 3 parts epoxy to 1 part hardener. But I needed such a small amount for my trial! I have postal scales, but they're analogue and it's hard to measure off the right amounts. I only needed a few grams! The glue gun was a lot easier. But it's the end result that counts. I tried it on a Friday before a warm weekend. The idea was that on Saturday I would be able to decide, and then bring my decision into practice before the weekend would be over!

On that Saturday I decided the difference wasn't huge, but that I suspected the real results with the epoxy would be better, as with a big batch it's easier to get the proportions right. So I made my decision! Epoxy it would be. The other stuff may come in handy for other purposes... 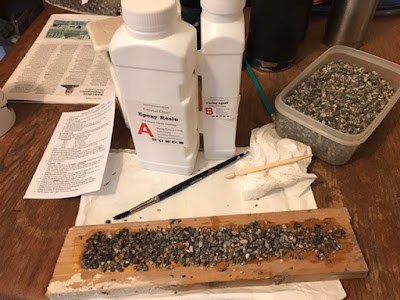