The decision had been made! After a trial of two substances with which I could stick fine gravel to my garden stairs to make them less slippery when wet, I had decided on epoxy resin. Time to make a batch, and set to work! I had fine gravel waiting.

I followed the instructions; heat up the epoxy, poor it in to a container, add the hardener, stir, apply. Or at least that's how I remembered it. All went well! I applied the epoxy and sprinkled the gravel over it. All went well. I noticed after a while the epoxy was steaming or smoking; that was not unexpected as the manual had pointed out that the reaction between the two components is exothermic. But it seemed to go a bit fast! And between the fourth and the fifth step, suddenly my epoxy has set. What? It is supposed to have a 48 hour setting time or so! What's this? And then I remembered that in the instructions, you have to let the epoxy stand for ten minutes after you've pored it. That's to get the air bubbles out. But inevitably, it cools down during that time. I didn't care about bubbles so I hadn't waited. But maybe my liquids had been too hot! I had not used up all the epoxy, so I threw that batch away and, after lunch, made a smaller second batch, for the remaining step and a half.

This time I didn't heat the epoxy. And all went well! And I had some left, so I glued some gravel to a piece of slate too. Would this trick work on slate too? Would the epoxy hold? I would find out! If so, then I could do the slate steps too! That would be great, as slate can be quite slippery too. watch this space! There may be another stairs related post to come... 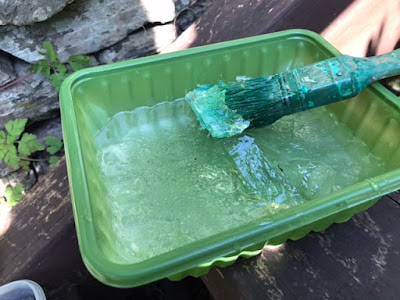 My suddenly set batch of epoxy; I was just in time to get the brush out 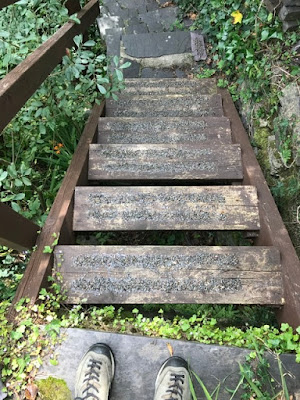 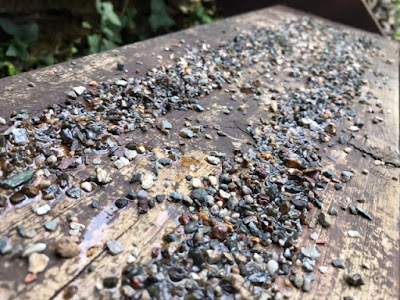 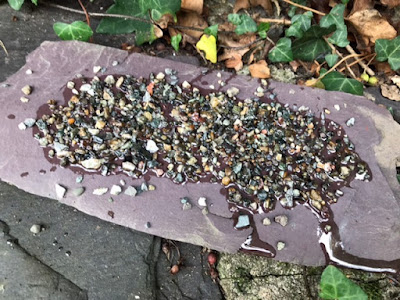 The trial piece of slate
Posted by Margot at 07:32