I think lighting is important! It really makes a difference for the atmosphere of a place. I like low and warm light. So I tend to have reasonably bright lamps in my ceiling lights, for when I'm doing pragmatic things, and smaller lights with less power spread around. In the living room, I had a lantern (another one of this type) hanging between the two windows. It was lovely! But recently it had been playing up. It would come on, but then start fluctuating, and then went out. What was that? I associate fluctuating light levels with fluctuations in power, but then all lights do it. This was just one! And I figured it wouldn't be the bulb, as bulbs either work or they don't, right? I wondered if it was a loose contact or something. I did some googling and that was suggested. I did wiggle the cable as much as I could to see if that did anything, and it didn't but I couldn't get to where the cable was connected to the lamp holder, and that was probably the crux.

So how to take this thing apart. There was a nut at the bottom! A good place to start. It didn't turn easily. I managed to fix the lamp in my workmate so I could get good purchase. I did manage to turn the nut, but it turned taking its thread with it! That's no use. Now what? I pondered all sorts of options. Then I decided to ask Facebook.

After a while, people pointed me in the other direction. The lamp holder itself! There were two slots in it. You could shove the prongs of pliers in them and fix it that way. Then you could turn the nut! And that did it! But then what? I had a look at the contacts. They looked fine. Wiggling didn't do anything. And you couldn't take the lamp holder apart. Not that I could see, anyway (does that say much?). So now what?

Then someone suggested it may have been the bulb all along. These LEDs are not like incandescent bulbs; these either work or they don't. LEDs can be temperamental! So I thought I'd plonk another one in. I thought I'd screw the evidently working (and identical) bulb out of the lamp on the writing desk. And promptly pulled it in two! Crikey. Another one down. I found another bulb and put it in the deconstructed lamp. And of course, it worked. I could have saved myself a lot of hassle! But I have now learned about LEDs, and have become sceptical about the type I'd been using. Lots have been playing up! The quality seems not to be very good. Disappointing. And I learned about how to get one of those pesky lamps apart. One day I might want to indeed change the lamp holder! Now I know how. And I have my light back! I really missed it... 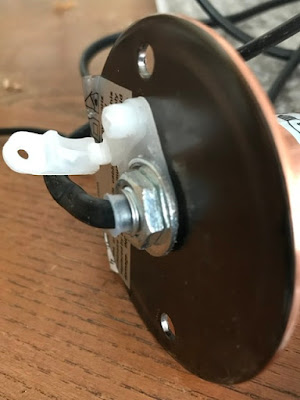 The nut that baffled me 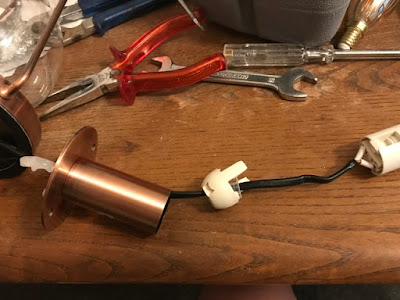