I run into Nant Ffrancon at least once a week. In a good week, I do it many times! And I always see the small cwms above me, and I had only been in one. And I had figured I could do a few more in busy times. Bike to the start of the walk, scoot up the hill, explore the cw, come down again, bike home. Sounded spiffing! And one day I suggested it to Fiona for a Saturday walk and she was up for it. We agreed to meet on the old road. I'd bike in!

It would be a very sunny day! I had packed my sunscreen. And I biked down. I had chosen my office bike to see how it would cope with the steep bits of Lon Las Ogwen. I was a bit late so I rode fast. And hit a rock. And felt my tyre go floppy. Oops! I phoned Fiona that I would be a bit late.

With a bit of a delay we set off. And between Snowdonia Cottages and Maes Caradoc farm we scrambled up. When we got quite high we started traversing. And then the cwm came into view! It was beautiful. Well worth the trek! And it had several sheep folds. And quite a few scramblers heading for the ridge. Not us; we had planned to just traverse out again. We sat down for lunch. Very nice!

We had planned to traverse into Cwm Ceunant but it was a bit uncomfortable going. There is no path as far as we were aware! So we decided to come down just downvalley of Snowdonia cottages. I'd been in Cwm Ceunant before so no particular need to visit that! So we cut it short a bit. And the rocks there were amazing. We had seen the amazing ripples from a distance, but now we also saw them up close. And there were so many trace fossils! Tracks of worms and trilobites and who knows what else. And some sedimentary structures. Great! That made scrambling down the uncomfortable slope a lot better.

When we were down again Fiona drove me home with my flat tyre. A short but nice walk! And if I ever want to ogle more trilobite tracks I know where to go now. I'd seen some on the other side of the valley, but on this side the place is just littered with the things! And I've learned to not be snooty about small bike rides and have a puncture kit with me even if I bike less than five kilometres... 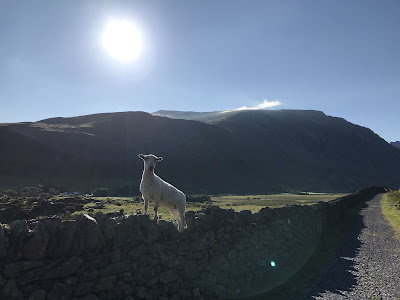 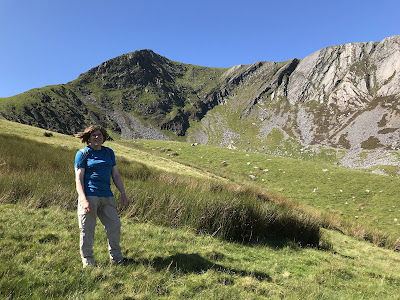 Fiona in front of the Atlantic slabs 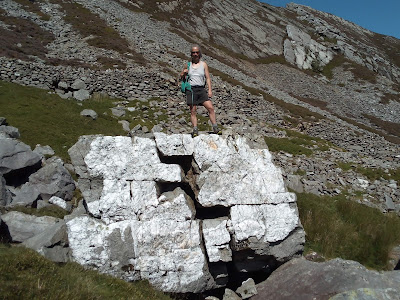 Me on a rather geometric rock; pic by Fiona 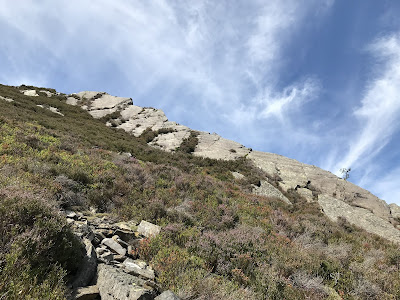 In full page view you can see the big ripples 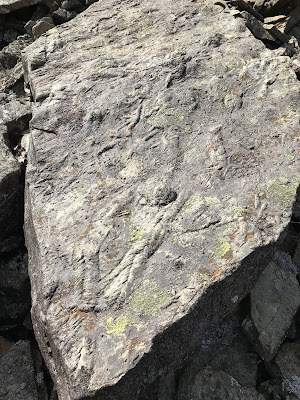 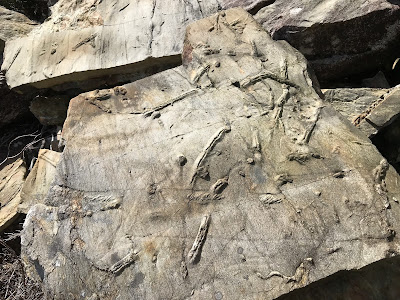