Life in the UK

When there were rumours that maybe, we Dutch in the UK could get a double nationality if the country would crash out of the UK without a deal, I decided I should be ready. So I ordered the book you need to learn off by heart. It took a while to arrive but it got there! And the decision on whether this possibility will materialise is far away, but hey, if I read up on this I learn stuff anyway. So I've started reading! The first condition (no deal) is becoming more likely by the day. And my interest was also peaked by the book appearing in the news! People objected to the rosy view of the UK's role in slavery. I'm not surprised. I was going to see what I think of it myself now! 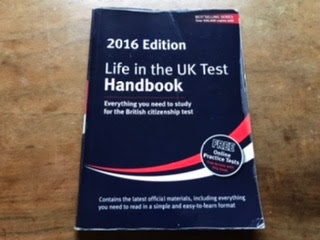 After some information about the actual test, the content starts. There are three chapters of that: one with history, one with what I’ll abbreviate as ‘culture’ and one with rights and responsibilities.
The history chapter is only some forty pages, so they have to skip through a lot in little time. But yes it does conspicuously gloss over things! On Cromwell they say ‘[he] was successful in establishing the authority of the English Parliament but did this with such violence that even today Cromwell remains a controversial figure in Ireland.’ Right.
The empire seems to just grow if its own account; no active decisions seem mentioned, and no perspective of the people who found themselves in said empire is offered. And it dissolves again frictionlessly when its course has been run. 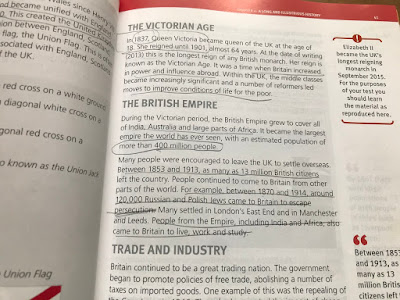 Annotations not by me; I bought a second hand version
And what else do you need to know? Some of it is rather pub-quizzy knowledge, like a list of 15 British inventions with their dates and inventors. Oh well. Not much harm in knowing these.
The ‘culture’ chapter makes you learn the various biggest cities, and public holidays, and patron saints, and notable artists and sportspeople, and that sort of stuff.
The rights and responsibilities chapter explains how politics works (or refrains therefrom) and the law and how you can make a useful contribution to society. It even mentions you should save energy and recycle!
So now what? Well, much of this I knew, but I learned a few new things. I may have a look from time to time. Get some of this stuff into my head, in case I need it! And I suppose it’s good I know now how much content there is; if I have to know it all by heart I can have a good guess now how long approximately that will take me! And even if I won’t need it, there is no harm in having this knowledge. I might do a pub quiz one time!
Posted by Margot at 08:32