The entire office? Well, no, that wouldn't be practical. But I dragged the essentials home! Computer including peripherals, desk, chair. And while I was at it anyway I took my teaching bike (for days when I drive to work but have to pop to Bangor to teach) home too. There in the office it won't serve much of a purpose!
I had phoned IT when I was running into the limitations of my old laptop. And they had suggested I take my computer home. But as my set-up at home had given me RSI I wanted to then also take the desk and chair. And I would need additions to my computer; it's a basic desktop, but I have to be able to do video calls. Laptops come with whatever you need for that. My desktop would need a dongle to be able to connect to my internet, a webcam, and a headset. Otherwise it wasn't going to work! But IT understood. And our head technician was OK with me running away with some furniture. It's not much use in the office if we're not allowed to be in it for any considerable time for the coming six months at least!
There was a slight delay due to the IT chaps going on annual leave, but one day I drove up to the office with tools in my bag. The technician let me in. He suggested I take some other desk so I could keep it, but I said I didn't want to keep it! If we go back to the office the furniture can come back too. And I really needed a desk I could take apart. I was confident I could do that with the desk I had! And in a way, I have two desks; they're just moved together to form one. I could just take one and leave the other. I didn't want to fill my entire home office up with desk!
I set to work. I first checked the computer. It had been made ready for being disconnected from the network from a distance (through the network, paradoxically) and I checked that had worked. It had! Then I could switch it off and disassemble it. And when that was done I could clean the desk a bit and take that apart into its constituent components. The technician had given me access for the day, so I could then ferry all of this down the three flights of stairs and into the vehicle of choice! I put the furniture in the van and the computer in the car. I figured the latter was safer being snugly tucked away in a modest boot. A good call I'd say; I could hear the furniture slide around a bit in the back of the van! But it's robust. 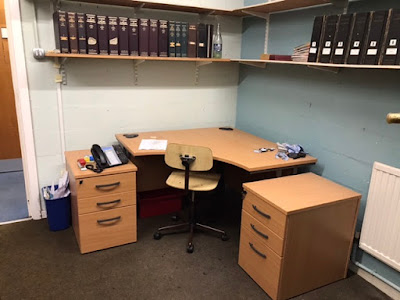 What's left in the office now
I drove home, unloaded the van, put everything in the office. It was no problem getting it all around the corner and through the door! Good. Then I sat down for a coffee. I am an untrained removalist and I felt I needed one! But then it was time to bring the van back and take the computer home. I had a small chat with our receptionist when I gave the van keys back. I was worried he'd be lonely as most people are not back in the office! He is residing over a largely empty building, But he said it was OK. So I said bye and drove home. I put the computer in the office, had lunch, and then quickly had to get back to my laptop as I had two meetings in close succession. No time to assemble my new office!
When the meetings were over I set to work. I put my old desk to the side. But that turned out to be not far enough! I removed everything that had stood between my old office and the wall with the window in, put the new desk in the corner there, screwed it all together, and then moved things around until both my desks were in a satisfactory location. Then I set up the computer! I first did the basics: screens, keyboard, mouse, tablet) And then the big moment: switch it on to see if it works. It did! It just came to life like that. Great! Then I added the peripherals, like webcam and headset and speakers. I have so many I was running out of USB ports. But I made it fit and it all seemed to work! And I could get back to work. And it felt better. I think some of that is due to the desk being deep and the screens big (by my standards): the screens stand back and I can just rest my forearms on the desk when I type. Comfortable! And I have both my mouse and my tablet in use. That spreads the load. I think I'm ready for a lot more work! 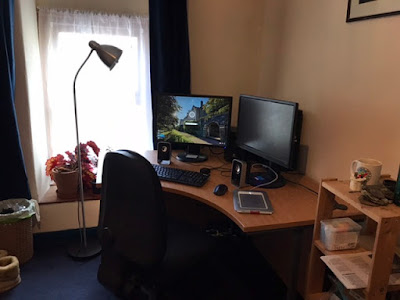 New home office!
The next day I had my first video meeting. And it went well! I wasn't producing funny sounds anymore (I had sounded like I had an early nineties printer in the background and I don't know what caused it) and I could see and hear everybody else fine too. Success! Bring in this new phase of working...
Posted by Margot at 07:50