We had only just had Storm Ellen! And then Francis hit. And Francis meant business. It would be raining all day! And be windy too. It didn't matter too much. I didn't have to go anywhere! Except out for running. And then you get wet but so be it.

It really rained. And rained! And rained. And the river was high. It wasn't coming near the garden but it looked impressive! And the little kitchen extension where the washing machine stands was burping. There is a drain there, and there is a ball valve in there. The ball valve is there to stop water coming up when the pressure is high, but it tends to burp when that happens. When it rains heavily, it smells a bit unpleasant there because of that. And a bit of water can come up!

I had heard the usual burping but hadn't paid much attention to it. I did my work and went for my run. I knew I would get soaked! So be it. I ran along the Ogwen and admired its strength. And came back in a dripping mess. But that was easily sorted out. I thought my floor by the front door showed the weather conditions well. 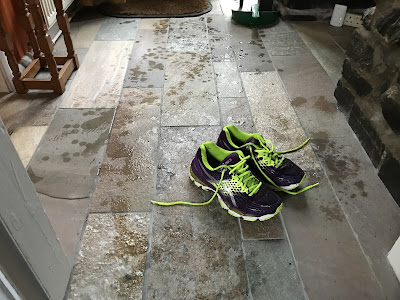 The Ogwen in the back garden was impressive but it is like that more often; I was so jaded I didn't even take pictures. Except from inside, to send to my sister, who had seen the Welsh forecast and wanted to know what it was like! 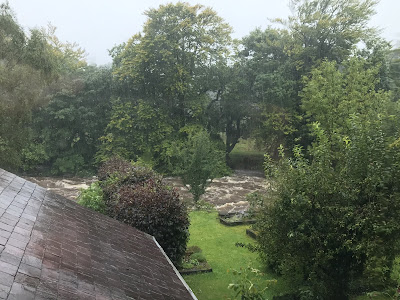 The next day I noticed some damp above the skirting board in the kitchen near the extension. Oh dear! I looked a bit more. The extension had been flooded! The water had now drained away but it had clearly been in there. Not very high! An inch or two. But still! Maybe I should raise the washing machine. I have a small pallet in the garage; maybe that should go underneath. 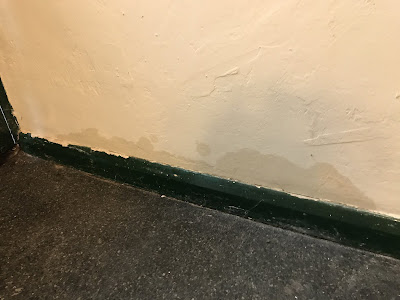 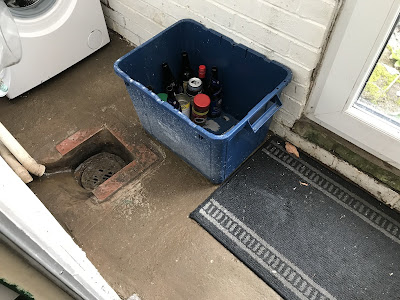 River silt in the extension! But notice absence of tide line on the washing machine; the water hadn't risen high

I also looked in the garden. And I saw the riverbank, which only days ago had been a jungle with Himalayan Balsam and brambles and knotweed and whatnot, was pretty much a barren wasteland. I won't have much knotweed to inject this year! And I won't have to wrestle through much vegetation to get to it. There's not much left! 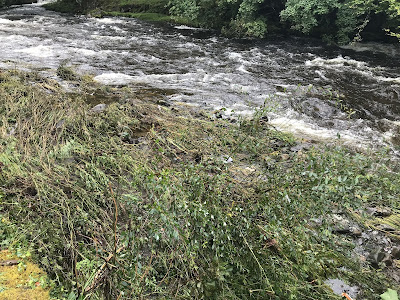 Not much vegetation left

I also saw all the pictures on internet of many roads flooded, a local bridge closed, the A5 closed due to a big landslide, people evacuated, and whatnot. I had to reassure some people I was alright! And the neighbour came to ask too. He had gone to look at the river in the evening, with a torch, and said he'd never seen it higher. Not in the forty years he had lived here! And that's strange; normally that happens in autumn. But nothing is normal these days. But I'm not too worried. I may live right on the riverbank, but the river here is fast. It tends not to linger! But there was more to Storm Francis than I had anticipated!