From berries to plums

Summer is progressing, and the berry season came to an end a while ago! The black currants ran out first. After that, the goosberry shrub yielded another load. My last berry dish was actually some black currant compote I had frozen to stretch the season out a bit. But it had to come out of the freezer as other things needed to go there. So that was the very end of it! But when the berries go, the plums come in! The tree was having ripe fruit. And if you just eat the plums raw, it gets a bit dull at some point. So I decided to give my plums the berry treatment: bake them into something and have them with coffee. So I did! And it worked. And I think that I might have to do that again, or make a batch of compote, with the remainder. And then the plum season will have gone. This wasn't a bumper year! But then the apple tree will take over. I like these apples as hand apples! And apples keep better than soft fruit. But I think I'll turn some of them into the occasional apple pie anyway! Especially damaged ones, as these don't keep very well. And then it'll be autumn and I'll go back to buying all my fruit! 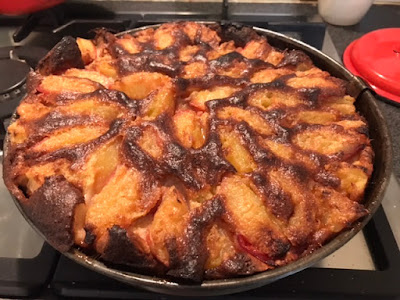