I grow all my vegetables indoors first. Only when the seedlings look big and strong enough to survive outdoors do they move out! But the outside world has its challenges: slugs, cats, and possibly more but unidentified creatures. And wind and drought and hail and whatnot I suppose. My courgettes and butternut squashes were among the first to move out. But they struggled! The courgettes mainly from slugs, and the butternut squash mainly from the cats. At some point I admitted temporary defeat and moved the butternut squashes back in. Back indoors they thrived again! But I figured in the long run they were better off outside. Better changes of pollination, and more space to lay down heavy fruit. So when they looked so big the cats wouldn't bury them anymore and the slugs wouldn't manage to eat all of them anymore, I moved them out again. Just to be on the safe side, I pushed some anti-cat sticks into the soil around them. And around the same time I decided to move some of the courgettes back in. I hope they'll recover!
I had also been growing carrots indoors. And I was growing a cut-off leek bum indoors too. Jenny said slug don't eat leek so I figured it could go outdoors too. And I put three carrots who had been growing in a separate pot outside too. If they'll be doing fine the rest can follow!

I think the aubergines will have to stay indoors. And I am not too sure of the chard. I'm sure it's hardy, but the slugs might like it too much! Same for the cabbage. But there's nothing wrong with having some of the veg indoors! So for now, these will stay... 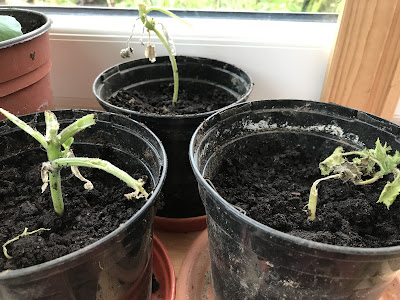 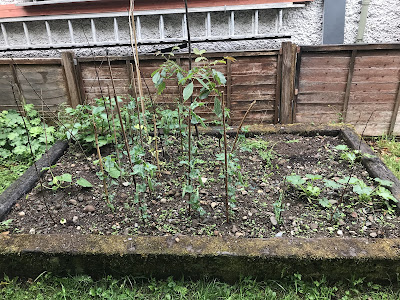 Lots going on in the veg bed! 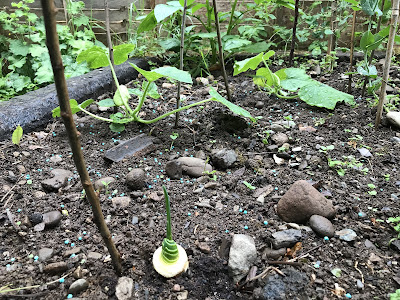 Recovered butternut squash plants outside; an a leek in the foreground
Posted by Margot at 09:13