I had been cramming social activities into three weekends in a row, ever since it was allowed. But weekends are also for chores! And for just pottering around a bit. And making sure you're recharged for the coming week. And then there had been the week in which I lost quite some time to plumbing. So then the fourth weekend I had to tone it down. And the good news was: it was crap weather! And given that you can only be social outdoors, it was an excellent weekend to tone it down. So I did some things related to plants (I even found a rare dry period for some necessary garden work!), and did my usual (but rather wet) runs, and dull stuff like homework and grocery shopping and sorting the recycling but I also caught up on some work that needed doing. I will have to do a fair amount of that. I have 22 lectures in the first semester! I will have to think of everything in these lectures how to deliver it in some different way. We can't just record our lectures and think that's OK! It needs more. So having a bit of a work weekend while the rain hammered on the roof was pretty much the best way to deal with things I think!
I got a fair amount of things done. Even though the only thing different is my mindset, I do find weekend working different from week working. For instance; I allow myself to do the most fun things. On a weekday I don't! But weekend work is bonus so I can pick the raisins out of the porridge because regular work means you have to do the porridge, whether it has raisins or not. And I decided not to work after dinner. I had a rare evening with my book in the conservatory! That was nice... 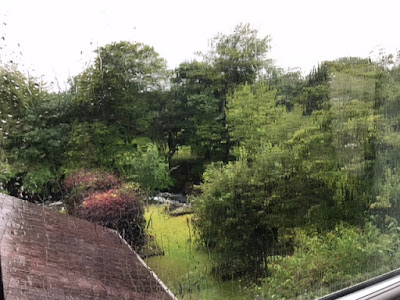