Last year I had registered for a Bangor race; I don't remember it that was the half marathon or the 10k, but either way; I ended up hiking with the Dutch bunch that day so I never showed up at the start. This year I got another chance! And I registered for the 10k; I would have a wedding later on and I know I am generally a bit extinguished after a half marathon. The newlyweds would have dibs on some of my energy!

I biked to downtown Bangor, and made my way to race HQ. I got my race number and decided to go look for a toilet. That was a bit of a shambles; the shopping centre that was race HQ seemed to have toilets upstairs, but there are no stairs going there, and the lift didn't work. Scores of runners made their way into the Debenhams, which seemed to be the only shop with toilets of its own. Then I sat down somewhere and read the paper for a while (never leave the home with something to read). Then it was time to take off my jacket, leave my bag at race HQ, and linger at the start until we could go. 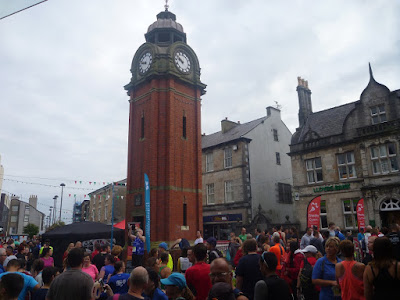 Gathering at the start, at the clock tower

Soon we were off. I had good hopes for a good time; I had run one the previous month, and this course was flatter, and I had been feeling good during my morning runs recently. And the weather was good; all was fine.

We ran from the clock tower (which had been the finish of my first marathon training run - I'd been so glad to see it!) to the Pier. I had always wanted to visit that, but I had never got around to it. Until now! It was very nice. And after that we headed in the direction of Penrhyn Castle, where the Parkrun is. From there we ran along the cycle path that follows the old tramway to Bethesda. I had never been on it, but I should; it's nice! A quiet path through the woods along a pretty stream, with lots of scenic bridges underfoot, on the side and looming overhead. (No pics though; I didn't want to break my stride for taking some. In the bright light of the pier you can get away with snapping pics while running but in the darker woods you don't). And I was enjoying the running. 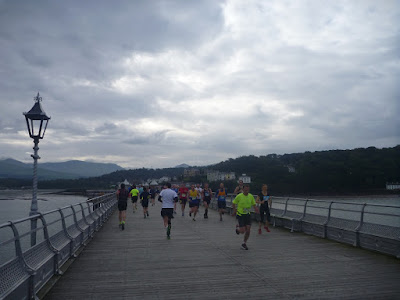 Two streams of runners on the pier

I missed the 8 km marker but I knew the surroundings and I knew when er weren't very far off. And then I saw the 9 km marker; that tends to be my cue to accelerate. I did; soon I was panting like a distressed dog. But I was doing well and I might indeed run a personal best! And perhaps overtake some relevant people. The most relevant ones are women my age; that does not only improve your overall ranking, but also your gender ranking and your category ranking. There weren't any to overtake. I saw a woman in the distance but whether I could overtake her was the question.

I came close; I saw that indeed I was on course for a PB. I saw the clock tick towards 46:30; I thought that meant I would break my PB with some 20 or 30 seconds. But I am notoriously bad at remembering my own times; so this time.

I finished a few seconds after the woman I had been pursuing. She had earned it! And after receiving my finisher pack I headed to HQ; no need to hang around, I could just get my bag and go home. 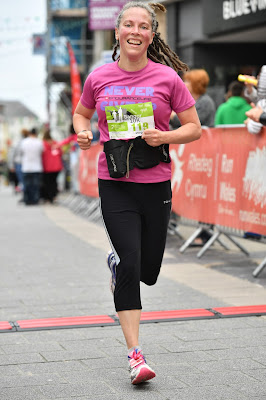 Still looking fresh at the finish, but that's appearance only.

In HQ a woman had set up a sort of a massage table and offered "Bowen treatment". I didn't know what it was but the table suggested it was something massage-like. I went for it! And it was really pleasant. After running your legs off it's nice to just lie on a table while friendly lady performs some sort of massage. My mind drifted off into oblivion. I had the impression the table was shaking; that probably was just my heartbeat.