I haven't raced for ages. I suppose I was distracted! And I even haven't run much recently. After suddenly having a rather long commute I ditched my pre-work run. I mean, there's only so much time one wants to spend on exercise. One has to hold down a day job too! So I ended up only running once a week. And not necessarily very far.

When I was hunting for houses I was initially rather infatuated by a little cottage on the outskirts of Llanberis. And it got so far I decided to register for the Scott Snowdonia 10k 2018 as it may be on my doorstep. Waiting to find out whether I would actually end up with that house seemed unwise; it tends to get sold out. But well, it's a nice race, so no harm done if I would end up somewhere entirely different!

I picked up my race number the day before. Much better than the previous time, when I had to get it on the day, but hours before the start! On the day itself I got into my running kit, pinned on the race number, and got into my car. Just in case I had my bike in the boot. Llanberis is awful for parking, and it would be extra bad with this race going on! It's not just the 10k; they have a half marathon, full marathon and an ultra on the same day. I may not manage to park near the start!

I tried to park on one of the big car parks but it was full. I then drove out of town, intending to just park it at the first opportunity, and bike back. And the first opportunity was in front of the aforementioned cottage! It had a 'sold' sign in the garden now. Cool!

I biked back and bumped into the start of the half marathon. We would only start half an hour later! I thought our start was 10:00 but it was 10:15. I could have had 15 mins more in my house! Oh well. I lay down on the grass and contemplated life.

Then the start happened. Off we were! We ran out of town. It was steeper than I had remembered! I took it easy. I was badly trained! But it was a great day for a race; very dry underfoot, and although a bit hot it wasn't too bad. I was on my rather worn road shoes so I would have been hopeless on mud. 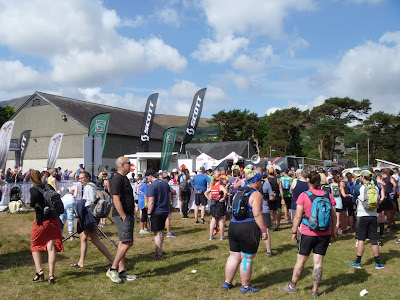 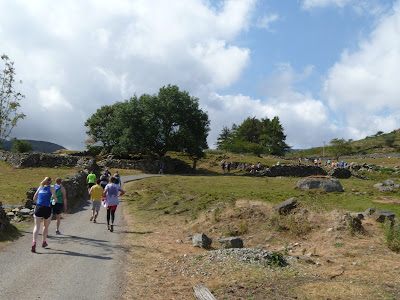 The sweaty bloke in the red shorts and the black leggings carries a French flag! It helped; later that day the French would win the World cup. 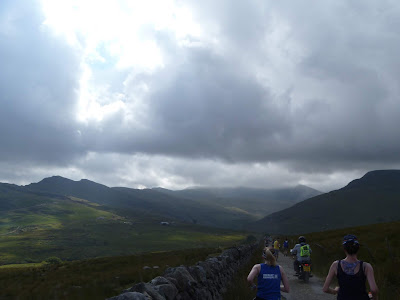 No, I don't know what that motorcycle is doing there either. 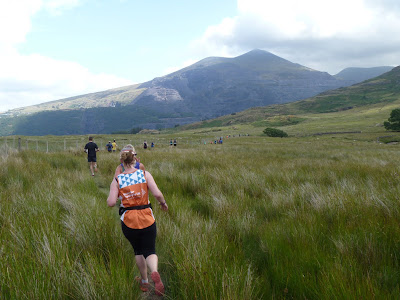 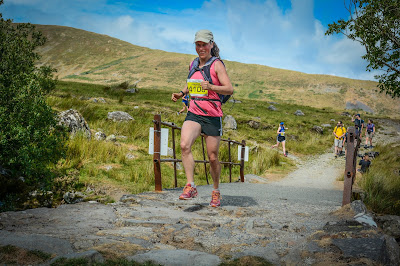 The first part went rather fast; in my mind, anyway. It was nice too; the views were stunning! And the return to Llanberis was over the road this time; the previous time we had had to wrestle through a field of ferns. Not now! And then we were off across the valley and up on the other side. That's known as the vertical 1k. And it is steep! Most of it is stairs. Most people (at least at my position in the race) walked. Me too. And I was happy I had water with me. I drank quite a lot! But it was hardly my good idea; bringing water was compulsory.

Then the route finally went downhill again. That was a lot more comfortable than the previous time; now the route was dry and thus not so slippery. And I still don't do the steep bits fast. But at some point the road became not-so-steep and then I could just spend the energy I had left. In the final 100m or so I overtook a lady I had run up with for a fair distance, but who had been faster on the steep downhill bit. And then I finished! With a time of 1:13:21. Two minutes slower than the previous time! Oh dear. And the funny thing was too that my overall position was better than my category position. Are there really fast women over 35 running this race? This only happened twice before: at the Leeds Xmas challenge and my first Penrhyn Parkrun. 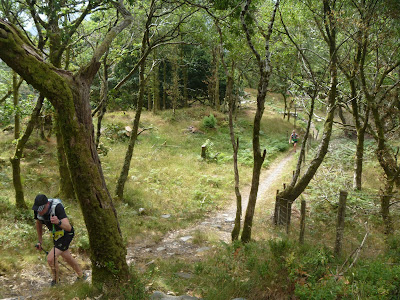 Almost at the top now! 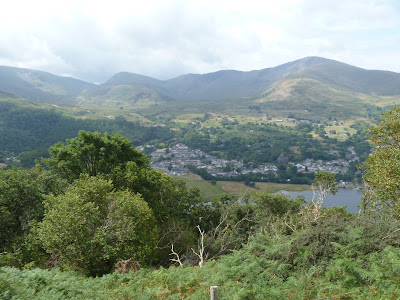 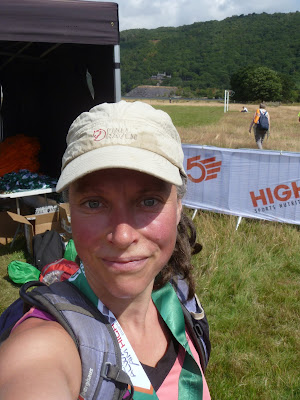 I was glad for the energy drink, bananas and bits of chocolate they had at the finish. And I got me a medal and a shirt. Then I was done! Time to go home and do chores! I think I should register for a few more. It's fun! Even after too little training...
Posted by Margot at 07:07