I love cheese! I have a two-shelves-and-one-drawer fridge and the top shelf is for cheese alone. I only eat cheeseless meals when I eat something that is vaguely inspired by Asian kitchen. (And breakfast.) But the tide is changing! I've known for a long time that eating dairy is bad for the environment. I should not consume so much of it. But it's hard if you're a Dutch vegetarian to make inner peace with the concept! But slowly it's coming through. I still eat milk with my breakfast. I only just got my milkman! I want to enjoy that for a bit. And I won't phase out cheese from my main meals. Yet. But I am eating much less of it these days. You don't have to drown your vegetables in the stuff! And now I may be ready to reduce the amount of cheese I eat with lunch.

My standard lunch would be sandwiches with cheese, peanut butter and something sweet, like Nutella. (And fruit, but that's not relevant here.) And how would you replace the cheese? But now I have two ideas. One is: marmite. When we are on the fieldwork in the south we always have marmite, as one of us never eats it at home (wife doesn't like it) but sees his chance here. And this time we had gone shopping and accidentally bought two jars. And I took one home! And I know the stuff has been for sale since forever, but I am a creature of habit and something needs to shake me out of my patterns. Like this.

The other idea is: vegan pate. I try to go to the monthly market in Neuadd Ogwen, and the last time there was a lady there who sold that stuff. And I tried some! She had three flavours, and you could buy a tub of each for £10. And I did! As it doesn't keep very well and I have no freezer I gave one to my vegan colleague. And ate the others! It's nice, and good for your soul. So I need to find out if she's often at this market, and also if she sells via other outlets. I could imagine the hippy shop in Upper Bangor! And the farmshop in Tregarth. I have to investigate. If I eat these things I can eat less cheese and feel good about that! And will I ever become fully vegan? No idea. Maybe! But I'm still not ready for that... 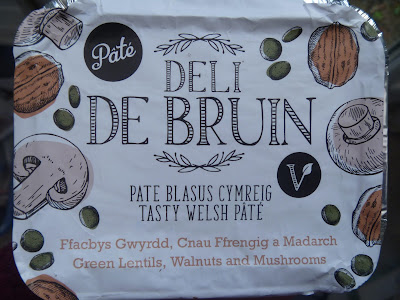 Yes, the lady who makes this stuff has Dutch ancestry!