New (old) paper and the response

Why did this take so long? Well, this was the paper to bring everything together, so we first had to publish all the papers about individual field sites, like this one. And then the idea was that Roland would write up the sites that didn't merit a record of their own, and the overview, all into one article. But that was a faff! Some of that was just circumstances; since we did the fieldwork, of course, Roland had moved to York University, and become Head of School, and whatnot. And writing something that is part synthesis and part data paper is hard. And several reviewers didn't like it much. And several journals rejected it. And we needed a new co-author with particular skills. So it took forever! But now it's out. Hurray!

What it does, in a few words, is look at several records on either side of the North Atlantic. And we found a pre-industrial period in which a certain part of the US East Coast experiences quite rapid sea level rise. This suggests that the various factors at play here (ice melt, vertical land movement, inhomogeneous oceanic warming, strength of the Gulf Stream, wind patterns etc etc) that decide sea level there can come together in such a way that this area got WAY much more than the global average of sea level rise. And if it did that then, it can do it again!

The US East Coast is vulnerable anyway; most of it is quite low-lying, and a part of it is probably actively sinking. The ice sheet on the northern part of the continent pushed the crust down into the mantle; the mantle material had to go somewhere and went sideways. And when the ice sheet vanished, that mantle material started flowing back. A bit like sitting on an airbed with someone else! If the other person (the ice sheet) gets up, you sink down. The same here. And then of course there is the rather variable Gulf Stream that also influences sea level. A lot is going on there! So the people there should be prepared.

All this seems to make so much sense. But not to everyone! I soon got an email from a journalist who drew my attention to an article in an American journal (online or otherwise) that had taken our article to mean that sea level rise was steady and hadn't accelerated and never would. Not sure how they managed to read that into it! But they had. And she wanted to provide an answer to this article. And she asked me for input. It was not a good week for it.

On a Wednesday night, after coming home from my meeting with Jenny, I set to work. She had asked for text with references. I assumed she would rework the text but hadn't asked for details. I started banging out a text but when I was almost done I saw my word looked dodgy. I figured I had better save this now. But I couldn't! Something was wrong with my word. And I didn't manage to copy it across to anything else, like Notepad or something. Shit shit shit! It vanished altogether and I couldn't find a temp file either. And yes I suppose someone better schooled in IT would not have let it disappear but it had gone outside my abilities to retrieve it. And I had been typing while actually already wanting to be in bed! That was disheartening. Luckily I remembered what I had roughly written, so I banged out notes, and retrieved the references. My browser was working fine! So the references were recovered by just hitting 'back' a lot in Google Scholar. I saved that and went to bed.

The next day I wrote it out again and sent it off. And the day after I go the mail that said it was done. She had just published my text as was! Oh well. I suppose it will do. Not the most polished text I've ever written but it'll do! And I didn't know she had asked the rest of the world to comment too.

Will this help? Probably not. I mean, I am one of the authors! If you twist our words from the article you'll twist our words when we respond to the twisting. This publication clearly thought climate scientists are a bunch of lying bastards anyway. And then why would we not lie in a comment? But well, sometimes one has to try even if one knows the other side won't listen. I suppose you can't win! You can't not call out this sort of thing, but it will probably change precisely nothing in the minds of the people who read that sort of stuff. Their minds have been made up! Whatever information you throw at them. We follow the data... 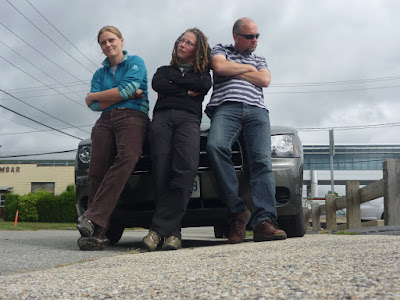 Picture form the fieldwork in the US we did, the results of which are incorporated in the article