A historical talk about slate! Even in a busy week I want to see that. Fiona had drawn my attention to a talk titled 'Estates and slate quarrying in Gwynedd'. And it was in the middle of the busiest time of term! But I didn't want to let that slip. So we went. We were early enough for a panad beforehand. And it was well-attended!

The speaker, David Gwyn, started. He said he had been a bit hesitant about the topic. Everyone with a glancing familiarity with the topic knows that the estates tended to have been run by characters of dubious views on society and equally dubious sources of money. The local estate, Penrhyn, which owned the quarry, owed its fortune to oversees plantations. And then they set out to increase it by squeezing the local community. The resulting strike is still by far the biggest thing that ever happened in Bethesda. But just because you don't like something doesn't mean you shouldn't talk about it. So he did! And with panache. 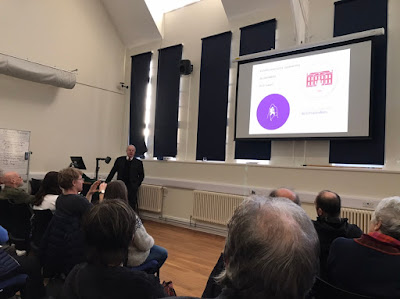 He first explained the topic wasn't straightforward; the two biggest quarries around were each owned by one big estate, but there were also big estates without big mines and mines not owned by estates at all and all sorts of permutations. But he went through the various estates, the various men at the head of them, how they related to each other, how they related to the quarrymen, and so on. He also went into the differences between the various quarries; e.g. he pointed out that the fact that the Penrhyn estate owned all the land in the quite far surroundings meant they could just build a railroad to the sea. Who could object? And they could also just make sure the nearby quarry owned by someone else couldn't. He didn't mention they could also sabotage that quarry's leat but it seems that's exactly what they did.

The audience seemed to have been largely local. The speaker sometimes said things like 'and we all know what this person got up to' and then the room murmurred agreement while I thought 'well I don't!' and was glad he explained anyway. And there were also things he didn't know; he voiced the hope someone in the audience would be keen to do a PhD in Victorian accountancy methods. And then dive into the financial archives of the estates. No voices piped up!

When he was done I sort of wished he would speak for yet another hour. I thought it was riveting! And then there were questions. And there were some words about the bid to make the North Welsh Slate Quarrying landscape an Unesco World Heritage Site (one day I'll come to delving into that myself and blogging about it). The man was involved! And he had an update. He said the bid had gone to government. And that after that, something happened that he never had thought to be possible. Boris Johnson had agreed with him! He added he hoped that Johnson would come around to his view on more topics, but that so far there had been little evidence of that. We're not holding our breath. But then it was over.

As I was yawning my head off by then we didn't go anywhere to have a drink and mull things over. Maybe after the next event of such kind! If there will be any anytime soon. This is not the time in which gatherings are viewed in a particularly positive light...
Posted by Margot at 10:00