After my first day of working at home I felt my back. And my bum. I know my office chair is not all that; I got it when I was a child, and I don't think it was top of the range then. So far I had never used it so much that became an issue. But if it’s uncomfortable on the first day, it’s untenable in the long run! So I needed to act. I had a look at if anyone had a better specimen on sale anywhere nearby. And they did! I saw two. And intended to buy one the next day.

By that day, one of them was already sold. The other wasn’t! I drove up to the village where it was for sale, sat on it to try, decided it was a lot better than the old one, and bought it. The man selling it didn't have an awful lot of trouble in guessing why I was buying it! And with some pushing it went into the car. (That sort of stuff was what the Citroen was good at!) Then I had the task of getting it into position in the office. Never a sinecure in my infamously narrow-doored house.

It had come through the front door OK. Not surprisingly; that's a modern door! And the door into the old part of the house was OK too. That opening had been made relatively recently so that was fairly wide. But then the door into the living room. That one is really tight! I tried to get the chair through but it wasn't going to happen. Not like this.But the chair had armrests and these looked like they came off. So I took one off! And realised the back of the chair was only attached to the armrests. Aha. Oh well! I took that off too. And then the whole chair was easily taken up the stairs and around the corner. And then quickly reassembled! This is the first thing I write while sitting in my new chair. So far I like it! Bring on the Monday with a full day in this chair! I hope this will make a big difference... 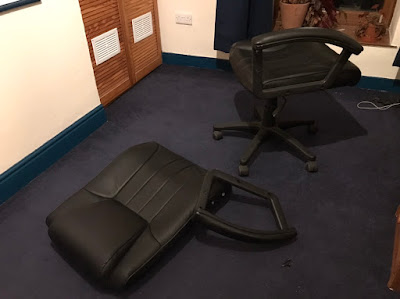 How the chair got into the office 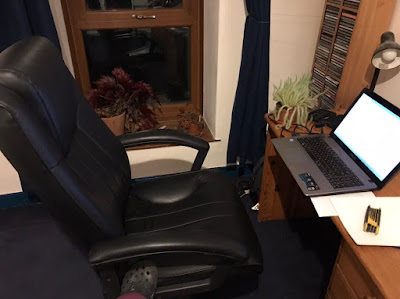 Put together and ready for use!