'I don't like International Women's Day'. It's not a strange quote but a bit unexpected from one of the official speakers at the Bangor University's International Women's Day event! But she explained; what she didn't like was that they were invented in 1911 and we still need them. And we do! At BU too; higher management is not rife with women, and we have a pay gap of about 10%. And a leaky pipeline. Lots of female undergraduates, postgraduates, PhD students, postdocs, and junior lecturers. But from there on it tails off. If I remember correctly, we have about 25% women among the professors in the entire university. And no that's not a pipeline thing; that's what people told me in 1993, and if that were true, surely by now these women would have come through that pipeline. They haven't! And Ocean Sciences is doing rather badly. No female professors (I think 6 male ones), 1 female reader, a minority of senior lecturers. And junior females leaving. Three have left since I was hired! And the men that have left for reasons other than retirement were either a professor, or the husband of a junior woman who wanted to leave and managed to find jobs for them both overseas. So yes we still need it!

Particularly poignant was that the woman who didn't like IWD was our only female pro vice chancellor. Our VC and the other PVCs are male. And she had just announced that very week she was stepping down as PVC! I do hope she gets replaced by another woman. It would be a bit embarrassing if the entire senior management would be a bunch of blokes. And she cared about that stuff! She mentioned she barely ever missed a graduation ceremony, as she knew that if she did, the entire front of the stage (with the dignitaries) would consist of only blokes. And she didn't like that! Rightly so.

She was only stepping down from her role as PVC, BTW; she stays on as an academic. And she promised us she would continue a project she had started, with digging out the forgotten female icons from the history of BU, and have some of their portraits hung in the Council Chamber (where, for instance, we meet before graduations). The walls are thick with portraits but of men only! She was set on changing that. Good! Next time there is a graduation (in July) I'll check!

So who was it she was speaking to? A very small crowd! The event had been heavily advertised but there was barely anyone there. They had booked a huge lecture theatre but that only emphasised how small the audience was. A pity! From Ocean Sciences there were the current and previous Head of School (one of them chairing the event), two researchers, and our newest lecturer. All male, by the way! I salute them. And then me. Good in a way SOS' representation was so male-dominated; men are likely to hear more things that are new to them on events like that. Women in academia know what it's like to be a woman in academia!

So who else spoke? The chair and the VC started. We had Orla Feely as the keynote speaker. I suppose we were lucky; she had come over from Dublin, and we BU employees are not allowed to travel on university business anymore, so it surprised me that travel the other way was still allowed. But I'm not complaining! She gave an interesting talk; some of it with the sort of stuff you expect from a talk like that (praise for the women who paved the way before her, a tale of academic success in spite of rampant sexism, etc) but I liked that she got specific about practical things too. She had been involved in what is colloquially known as women-only professorships. (I think they are technically underrepresented group-only professorships). They will happen in Ireland soon! And I think that's great. Professorships have been male-only for centuries so some positive action here is something I support. And I hope these underrepresented group-only professorships will also include chairs for males in disciplines where they are scarce (these exist too, just not in my field).

During the last graduation ceremony, my guess is that about 95% of nursing graduates were female. That's not right too! I think society is being done a disservice if there are entire disciplines entirely dominated by one demographic. And how well are we doing on race? Sexual orientation? Etcetera? Not well, as far as I can see! So still a lot to do. 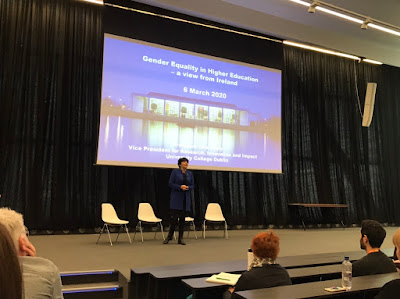