The first Open Day is always the hardest! So that one was thankfully done. And now we could do it better the second time around. And we better had as it was going to be busy!

Open Days are organised by a team of people: an academic (in this case me) who organises demonstrations and staff, an admissions administrator who books the rooms, organises the catering, deals with registration etc etc, the Peer Guide coordinator who sorts Peer Guides (also me), and the technical staff who make sure the lab is ready and the people doing the demos have everything they need. And I had just done one, the technical staff is a well-oiled war machine, but this would be the first Open Day for our admissions administrator. And that's stressful! I remembered my first Open Day and I was happy it was behind me.

I got in and started preparing. I made sure I had a schedule for the demonstrations, for either ten groups or eleven, and I brought monitors and a laptop to where they were needed, and all that sort of things. And then things started to go pear-shaped. The door to the lift wouldn't open, and we had people with mobility issues! And the computer in the lab wasn't working! And there was an UV light, that we needed for a demo, missing! And relevant people were nowhere to be seen minutes before they were needed! And not all Peer Guides showed up!

All got sorted, of course. We just plugged a laptop into the system so we didn't need the computer. Our administrator managed to fix the door. People appeared coolly in the nick of time. We recruited the person who needed the UV light as a Peer Guide. All worked out!

Then the visitors appeared and the hectic bit happened. I had to make the final group allocation and the final schedule! But when that was done and the groups were on their way it got better. We had quite a selection again; something with bioluminescence, ocean acidification, and tanks with everything from lugworms and nudibranches to crabs and starfish. And much more! 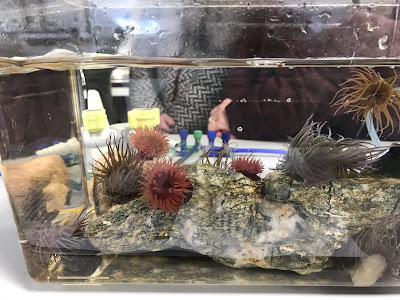 Visitors behind a tank with anemones

When everyone was being entertained I had time to eat some sandwiches. And I did some small chores. And then popped over to see how things were where the non-applicants (mostly parents) were. And got dragged into taking a group to a demonstration and to the ship. And then it was as good as over! It had gone rather smooth. Success! So we did a debrief, tidied up, and that was it! Our new administrator had done a sterling job but looked exhausted now. I understood! But with that, the second day was done! And then I could start organising the next one which will be in early April. I get to keep a few weekends to myself now!
Posted by Margot at 08:43