It'll be a lot of first timers for a while! But the first working day is quite a milestone. In the pouring rain I biked to uni. I knew I had gotten some emails on what to do first, but I hadn't managed to get to my email, so I just guessed. I went to the main reception.
Wrong. I decided to just to to the department and wait for Roland, my new boss. I did not see him coming, but I did see a secretary, who suspected it was me, and took me under her wing. Roland was going to be late: issues with an unwell wife and a very young child. But I was going to be fine in the hands of the secretaries. Within no time I had an office with all that's needed! And soon after an appointment with HRM. Who were rather flexible: I had to disappoint also them with my lack of address. 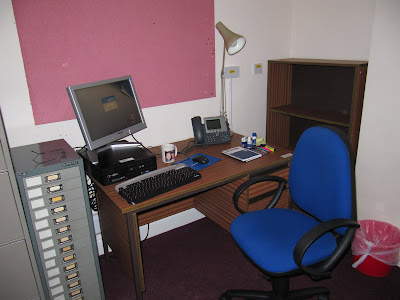 The office. Notice they provided it with some pens, tape, post-its and the likes! So cute! 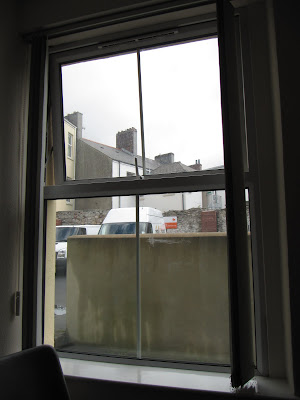 The view is unspectacular, but one can't have it all

And things started rolling. At 2PM Roland showed up, and took me through the campus. And before it was beer time I had a key, a uni ID pass, an access code, a login, an idea of what was where and who was in it, and a CD full of articles. Things can go quick!
The office by the way is in a charming line of old houses, in a remote corner where the offices never get overheated, yet where you feel like you're the only one in the building. It's nice, small and cute, and I can see myself cosily working here for two years! And all the people I met during the day were lovely. 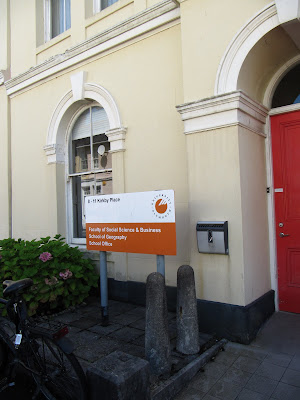 The entrance of my new working place. Notice the beautiful bike.

At 17.30 Roland, decorated with very wrong sunglasses, came to pick me up for a beer with my new colleagues. In the pub around the corner. It seems not to officially have anything to do with the university, but it is widely used as a campus pub. With Roland buying a round I still don't know how pleasantly little a good ale costs, but it was good to taste one. One of the drinking fellows, who happened to be on one of his last UoP drinking sprees due to finished contract/thesis, turned out to be a political geographer. A what? Science never ceases to amaze. And with these intoxicating words I may very well terminate this epic on a significant day at the University of Plymouth. Many more days to come! 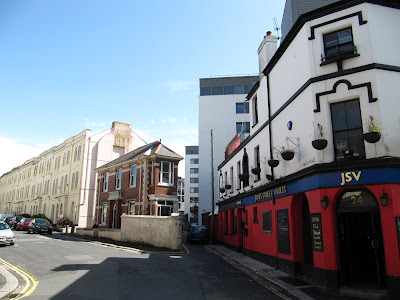 The pub on the corner. The row of houses behind it is where my office is.
Posted by Margot at 13:47

Your new office clearly demonstrates once again that Health and Safety regulations are still unheard of in the UK... Well at least you have some direct sunlight coming in, that must be a luxury in the building?
Anyway, good luck the next 2 years, and then we'll meet again ;-)

I preume there is some rule somewhere that your desk should be adjustable... and the chair is a bit of a lame specimen. But beside that I see nothing wrong!

Well, beside what you mention, our alotted space is way too small (here min. 8 m2) and the space around keyboard/mouse is way too small. Furthermore, I get the idea from the photo that any Dutch Fire attedant would go nuts about the amount of furniture and stuff blocking passage?

Blocking passage? Tsk! The stuff is standing against the wall, not against the door. Easy to get out. And eh no it's smaller than 8m2. Something like 6.5 or so. And eh yes maybe you're right about the desk too. Perhaps I should place the computer on its side! That saves space.