Yes, a car with fixed wheels is a bad idea! I didn’t know I had one. But at the moment, I do. I only found out when I brought my car in for a service. They couldn’t get the wheels off! Every wheel has one anti-theft bolt.  And you need a special tool to get these off. And the tool came with the car, but it’s cracked. The garage didn’t dare put stress into that! They figured it would just shatter. 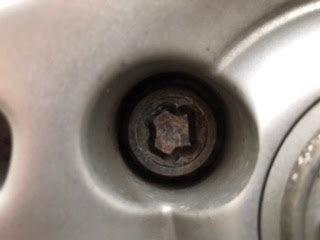 One of the bolts in question

I don’t know why my modest car has this precaution. If you want to steel a wheel, wouldn’t you want a more glamorous one? But clearly, the previous owner didn’t think so. And I hadn’t noticed that when I bought it.

The garage had said they had phoned the nearby Vauxhall garage to see if they could order a replacement tool. And that the response had been that they couldn’t; they had to see the tool in question so the next Sunday I popped by. But it turns out that the parts division is closed on Sunday! But they said I could just give them the number on the box the tool had come in, so I didn’t have to appear in person. Hm! Weird.

I phoned them that Monday, but the number on the box turned out to not be the number they needed. It was a number IN the box they needed, and my box did not contain one. Aha! That was why I needed to come in person. So I came back. And a man came out with a whole suitcase full of tools. They come in all sorts of shapes! And the second last one was the right one. They didn’t have it in stock but they could order it. I would have to come back yet again!

The Saturday after I learned our Open Days were cancelled I popped to the Vauxhall garage again, and got my tool. As I was in the vicinity anyway, I popped by at a friend. That was nice! We discussed the virus situation over coffee. 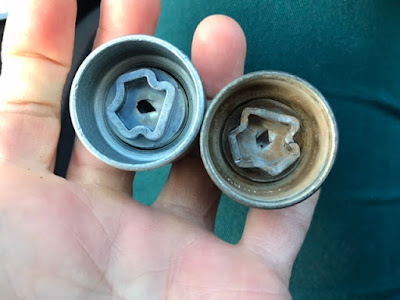 New, pristine tool! And the old, cracked one for comparison.

That Monday I went back to my normal garage. Could they sort the situation out now? They would try! And in the afternoon I picked it up again. They had wrecked my brand new tool and had had to use drastic measures to get the buggers out but they had done it! I now have removable wheels again. I’m very relieved! And they didn’t even charge me; they said it was still part of the service they had done a while ago. That was kind of them! So if I now get a puncture I can hopefully just sort that... 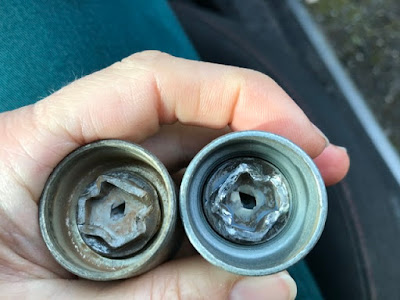 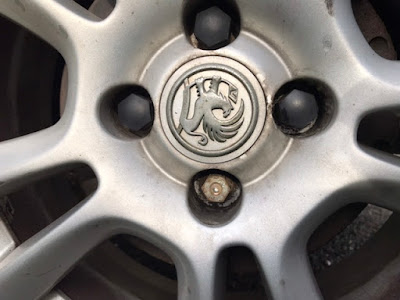 Normal bolt on my wheel!
Posted by Margot at 09:27