Fieldtrip to the beach - while we still can

We had another trip scheduled in our fieldwork module. This time we were scheduled to go to Rhosneigr. I had missed the previous trip, and had no time for a recce, so I had to prepare in theory! I had said I would say some things about the blueschist at the base of the Marquess of Anglesey, and about the folding of the sediments on the beach.

As usual, Dei and Jaco went to pick up the students, while I drove the SOS car to the meeting point. We would do the blueschist first. I did my spiel there. It's remarkable rock; it has gone down 35 km into a subduction zone, and then come back up before it heated up to more than some 500 degrees.

After the blueschist we went to Lake Maelog near Rhosneigr. There we wanted to look at the ~600 Ma old granites. And the rock around it, that has been baked into contact-metamorphic rock. Dei did the bulk of the talking about these. And on the other side of the lake (it's not a big lake; geology changes quickly on Anglesey) we were back in sedimentary rock. And we had Jaco; he can talk a long time about sedimentary rock. He really kicked off when we came to an outcrop he hadn't seen before; it was unusually beautiful and he improvised a lecture on sedimentological processes as seen in the rock (including low-tech experiments!) on the spot. Rather cool! 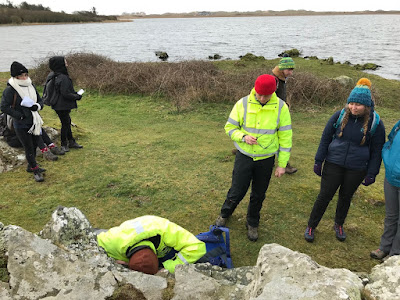 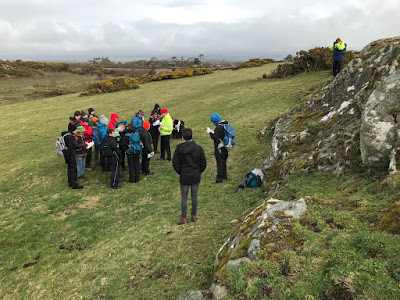 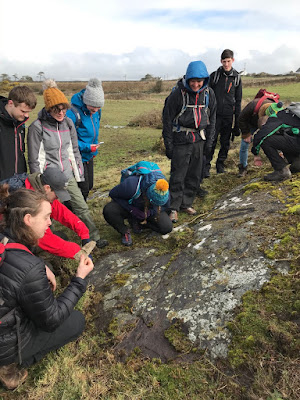 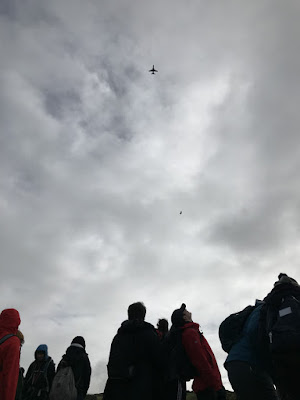 One does a trip near RAF Valley or one doesn't. Yes that smaller spot is a jet too. 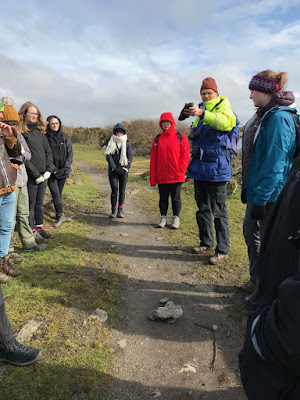 When he was done we were hungry. As Jaco was addressed by the local farmer who wondered what all the fuss had been about and Dei was wondering where his bag was I took the students to some picnic benches in the dunes.

After lunch we went to the beach. I there did my spiel about how the joints in a rock will fan out when they come to a hard bed, and converge back when they get back into soft rock. And how you can tell where the top of your fold is from smaller auxiliary folds. And spoke of when the folding gets so severe the hard beds start to look like strings of sausages.

When the students had gone to look for these features themselves, we let Jaco loose again. The hard beds were turbidites and those are his favourite thing! And he can talk about them for days. And by the time he managed to stop himself it was time to get back to the vehicles. We all felt this may well have been the last fieldtrip in the series. We have several more in the timetable, but let's face it, this sort of thing may get cancelled soon. How much longer can you pile students into a minibus and cart them around? As soon as you are outside, infection risks are low, but you have to first get the students (and yourself) to the outside location of choice. Well, if we have to stop here, I think it was a good finale!
Posted by Margot at 08:29