Future of our oceans

As titles for public lectures go, 'the Future of our Oceans' is quite wide. But some people can pull that off! And I was about to find out that Jacqueline McGlade is one of these people.

I had seen the announcement. It wasn't a convenient time! It was in the middle of one of the busiest weeks of the academic year, and it overlapped with my Welsh practice. But sometimes you need to make time for something. Jenny would initially join me, and then we could discuss the matter afterwards in Welsh, but for her this was an unusually busy time too, so she pulled out. But I went!

It was packed. We were asked to move in, so any empty seats in the middle of a row would get filled. That was how busy it was! And I saw many familiar faces. It is the kind of lecture to appeal to Ocean Scientists!

The speaker was introduced by our Head of School (who was having a busy time too, due to the Covid-19 virus and its implications). He spoke of her fascinating life! For instance, you don't get many Bangor University alumni that end up both being the Chief Scientist and Director of the Science Division of the United Nations Environment Programme and living in a mud hut in Maasai territory. But she pulled that off!

He also mentioned that she had been on the radio programme 'The Life Scientific'. I think I heard fragments of that while doing other things! But now I will definitely listen to it again. Intently, this time!

Anyway. What did she actually say? Well, a lot! She spoke of the vast quantities of plastic already out there in the oceans. And how people try to quantify it. And what risks it brings. We all know about seals with a piece of fishing net around their necks, and turtles eating plastic bags, but there is much more to it. She said research had been done on what kinds of bacteria (and such life forms) can live on oceanic plastic. And one of them is cholera. We can expect epidemics coming from the sea! How many people can see that coming? She also mentioned that there are so many plastics out there that no toxicological studies have been done on. At all! And it even seems to be the case that manufacturers don't want to even tell you what's really in their materials. And you can try to find out after it ends up as trash (zap it with X-ray fluorescence, for instance) but that's time-consuming and expensive.

She also mentioned how that plastic ends up in the sea. Some of it simply is lack of funds. How many harbours don't have a waste management facility? She also discussed how technical solutions for one problem can create problems elsewhere. And she discussed how green-washing is causing trouble. Manufacturers like to put a 'biodegradable' label on all sorts of things, but that seems to be allowed if these things are only biodegradable under very restricted circumstances. And 'in the sea' tends not to qualify as such! We in Bangor had an issue in the university that the regional waste facilities couldn't biodegrade our biodegradable coffee cups. So then it's useless. And people might not really focus on consuming less packaging if they think this packaging is harmless. Even if it's not!

She also said that beach cleaning sessions are pretty futile; the next tide will bring lots of waste back. But she pointed out that if you've done a back clean, and you've seen what ends up on beaches, you may then try to avoid using that kind of material in the future. We can't really feasibly clean the oceans; we will have to reduce the input! And personal choices matter, but she believed more firmly in legislation. Some countries had just banned the use of plastic bags. It can be done! And that works best if all countries work together otherwise the plastic bag manufacturers just move elsewhere and keep producing the same amount.

She kept us all on the edge of our seats. She was a great speaker! I can imagine they asked her. And we were lucky to get her. And just in time; I don't think the university will host overseas speakers anymore now, for a while!

When she was done there was time for questions. Interesting ones were asked! One of our students asked how she stayed optimistic. Someone else asked if we can filter the plastic out of the oceans. And I asked something a bit trivial but the questions started to tail off by then; in the beginning, she had said that 75% of plastic that ends up in the ocean does so between May and October. I was pondering that. Was that just the monsoon? But she had forgot by then she had said it. And her slides weren't up anymore. A bit of a goose chase for that information ensued! And yes it was the monsoon. Blimey I didn't know that effect was so big.

The question I liked most was: imagine you are given a billion pounds (or dollars, I forgot) to make a difference, what would you do? And she had an answer ready; build waste management facilities in Asian ports currently lacking one. Makes sense! Asia produces very large fluxes of plastic. And quite many ports won't be able to afford this themselves. And it creates jobs for the local population!

Then it was time. The chairman thanked her and we went on our way. I had a small chat with two acquaintances and then I got onto my bike. It had been worth it! And I'm sure going to listen to that radio programme... 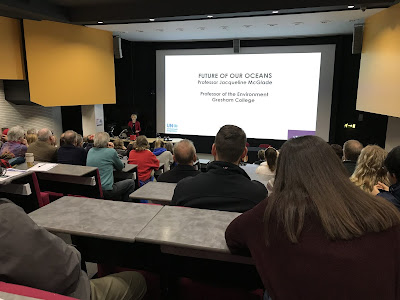