The gardening season has started

I had seen weeks ago that the grass needed cutting. I had lots of excuses why I didn't have to do it! But I finally got around to it. I suppose that kicked off the routine! I will now do it every two or three weeks. And when I was at it anyway I started another big session of trying to get rid of poppies. One raised bed had been dominated by them. I had ripped them out, but these things won't give up without a fight. So small poppy plants were coming up everywhere! Time to do something about it. For now, anyway. They will come back up.

I think my garden will get rather tidy this year. I think I should take regular breaks from working at home. I just don't have the same set-up, even with the new office chair. I have had RSI before; I don't want it again! And the perk of working at home is that you can do an hour of work, do fifteen minutes of gardening, do an hour of work, etc etc. Or two hours of work, a run, two hours of work. As long as we are still allowed out to run! Otherwise it surely WILL be the garden. And then it'll soon be spic and span! 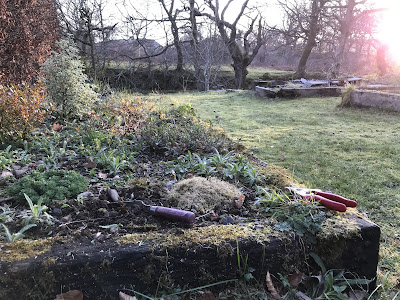