When the new underground group was established I started pondering where I wanted to go. And one mine I was keen to have a look at was Britannia Copper Mine, on the flanks of Snowdon. I had walked past more than once, but always on a mountain walk, and not having things like a torch or wellies with me. So I was keen to go for real one day! But I wasn't quite sure what would have been needed so we figured maybe a recce was a good idea. And we did that! After a heavy week in the office, both Chris and I were keen on some fresh air. And for the first time, Kate (Bob) joined us. We had to get there early; the only logical place to park is at Pen-y-Pass, and that parking lot is full really early on. So we gathered on a nearby lay-by, and drove the last bit in one car. And the weather forecast had been OK but we drove up in rain! Oh dear. Not much visibility either. But well, what can one do.

We started on our way. It was a bit drizzly; nothing too onerous! But it was quite windy too. We walked up past Llyn Llydaw. And then, barely seen, we reached Glaslyn. And I knew there was a conspicuous entrance there. We would look at that first! I donned wellies for the occasion. Chris and Kate just resigned to wet feet. It didn't go very far! But now I new. And we used the dry level for a cuppa. 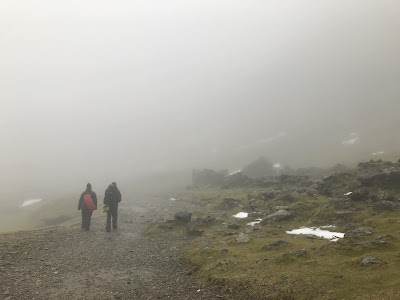 Reaching Glaslyn in the fog 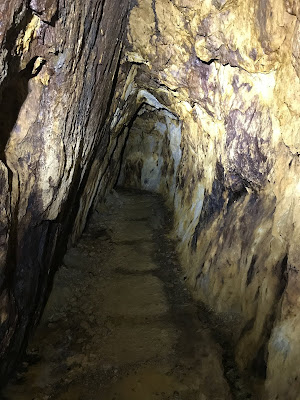 Then we had a look higher up on the hill. We knew there was a lot of spoil higher up. You can see it on the satellite image! And it was clear here in the field too. But we didn't see any entrances. And the weather was atrocious by now. We decided to go back down to lake level and look a bit more there. So we walked along! And after a while saw a structure. And we found an entrance. It was a bit wet so initially i just went in alone, in my wellies. But there was so much to see the others followed. I followed the level to the end, including an over-the-knee in water bit. I advised the others against following there; not worth the damp! And there was a level a few meters up but well, exploring that would involve a lot of lugging kit up the hill. It took us some 75 mins to get to the lake! With light kit. Not sure we will ever bother with heavy stuff. A drill would be doable but it was a rather wet spot; you'd be hypothermic before you would be finished. And your drill would have short-circuited. A ladder would be ideal but that's a pain!

We went out and looked around a bit more, but we were getting cold and wet. We decided to bail! And made our way down the scree slope, with difficulty. It was the sort of scree slope that's a challenge on any day but with wind in which it's difficult to stay upright in the flat it was extra interesting. But before we came down all the way Kate stopped us. She found another entrance! And it was so wet we didn't want to go in. I had already changed into my boots. We left it for another day! 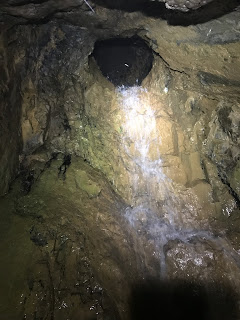 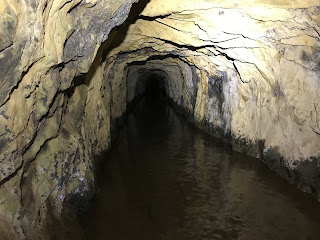 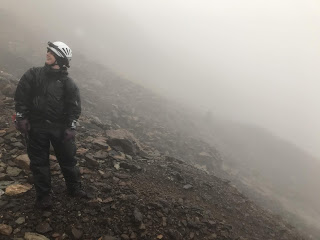 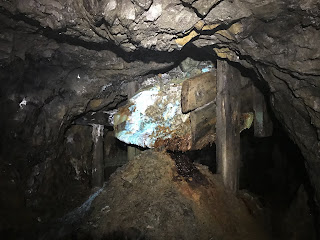 We made our way back to the path. And then back to the car! And the parking lot has a cafe. We went in for a hot chocolate. That was a lovely thing after such a damp morning!

I had figured we would have to do this mine in winter as in summer it's so busy. But we decided we could just ramp up the earliness. If you get there at dawn you can park! So we might not have to wait too long (I consider the busy season to start at Easter, and that's soon, and before Easter I'm very busy) for the proper trip.

When I got home I checked the pictures on AditNow; the best bits of the mine, as far as documented, are in the adit we considered too wet. Now we know! And we can come back with a clearer idea of what to expect! And maybe wait for a day with better weather...
Posted by Margot at 08:32