Sort out the home office

The room so far often referred to as 'the spare room' had been ready for a while! But I had not got around to take it into use. But a stormy weekend that wasn't very good for outdoor activities provided the perfect opportunity.

The first thing I did was hang up curtains. That involves drilling and thus dust! When the curtains hung I hoovered the place. And then I could put things in. I started with the desk! I had to take it apart to get it through the door but that wasn't too much work. It was quickly rebuilt. And with the desk (and computer) basically the office was an office! 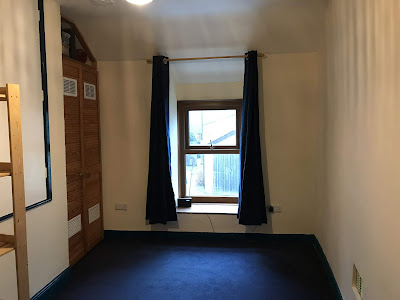 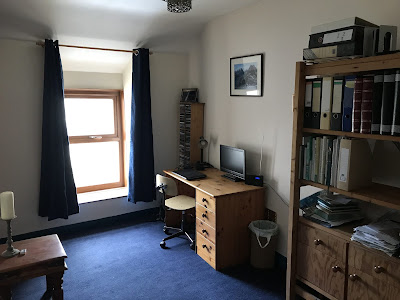 The next day I emptied out my big cupboard, and took it apart as far as I needed to get that out too. And then rebuilt it. I wasn't entirely sure where to put it but I put it somewhere and it would do. And then the mail work was done! I hoovered the room the desk and cupboard had come from and then moved the bed to a better position. It had been crammed into the corner a bit. And now, with the furniture spread out over two rooms, it could stand pontifically in the middle (yes that's a Dutchism). And I decided to take the curtains in. They are too long and drag over the floor. So I took them down!

I also moved the shelving to the bedroom. If I have guests they have somewhere to put their stuff!  And I brought a chest of drawers up that had been waiting in my master bedroom until there would be space upstairs. And then it was time to ponder pictures. There were none in the office! For now. But that had to change.

I first raided the bedroom. That had lots of pictures! And I could nick some. I spend a lot more time in the office so that has priority. So I hung a big picture above the desk, a moderate one above the radiator, and three smallish ones next to the big built-in cupboard.

The office is now sort of ready! I might want to put a comfi chair in even that room. There's plenty of space! And I love comfi chairs. But it works already! And it will be more comfortable; for some reason, it's warmer than the bedroom. And given that I like my offices warm and bedrooms cold that's fine. But doing work at home is now done in more comfort! And if I (or someone else) now want to sleep in the spare bedroom that's nicer too; the bed now has a bedside cabinet with a lamp and an alarm! Which, for space reasons, it hadn't had since moving into that room.

I'll have to do a bit more selecting, printing and framing pictures to finish it all off, and of course finish the curtains, but that's OK! The bulk of the work is done!
Posted by Margot at 08:31