Storm Ciara had caused quite some trouble in the area, and she was barely gone, and Dennis was on its way! And he would hit us in an Open Day weekend. Not ideal!

Dennis was expected to be less vigorous regarding wind but more so regarding rain. So what was it like? The Friday was gusty but not awfully so. It wasn't biking weather but that's OK. And when I woke up on Saturday it was quite unpleasant outside! Gusty, and lashing with rain. But no traffic issues yet it seemed!

The Open Day was wet and gusty too, but not detrimentally so. And afterwards I drove home without issues. No floodings! I did see a warning on Facebook regarding the road having flooded a bit further southeast (like the week before). But what can one do. I hunkered down.

The next morning I wondered what the river would look like. It had still been raining in the night! But it wasn't particularly high. There is a big rock in the river and any self-respecting rain storm obscures that completely. Ciara had managed that. But Dennis hadn't!

Other places weren't so lucky! On the news I heard about problems, mainly in South Wales and Yorkshire. York was doing it normal wet thing! I had seen that from close up while living there. I know Dennis has caused a lot of people grief but it seemed to have left Bethesda alone! 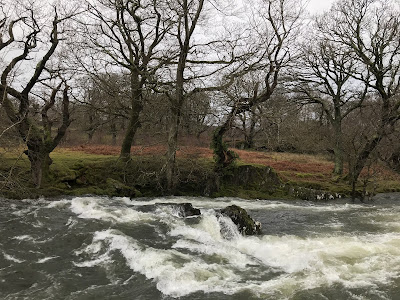 The rock still visible! Unlike the week before...
Posted by Margot at 08:32