It was that time of year again! Time to go to Lleiniog; an Anglesey beach with amazing sediments exposed in a cliff section. We have nine demarcated rectangles on the cliff we ask the students to log. They are asked to record things like composition, grain size, sorting, roundness, colour, structure, etc. They have learned the theory already and now they get to do it for real! I am not involved in the rest of the module but I have been doing this trip since I got this job.

The routine is: I go there on my own early in the morning with nine laminated A4s with the letters A to J on, a hammer and pegs. I check if our demarcations are still there, and if they aren’t, I make new ones. And I hammer the signs in. And by the time I’m done, my colleague Lynda arrives with the students. We get one group in the morning and one in the afternoon. The group we don’t have is nearby, either surveying or coring, or both.

The sediments are from some 20.000 years ago; they tell the story of enormous ice masses and powerful meltwater streams and all that kind of spectacle. We are lucky to have that on the doorstep!

All went according to plan. Thanks to storms Ciara and Dennis I had to make several new demarcations! But I had a good time on my own on the beach. I also got the best weather of the day!  And when I was almost done I received a text from Lynda; she was on her way. I drank some coffee while waiting for the bus. And had a flapjack. Certified nut free! We had a student with nut allergy so we had to be selective with our foodstuffs... 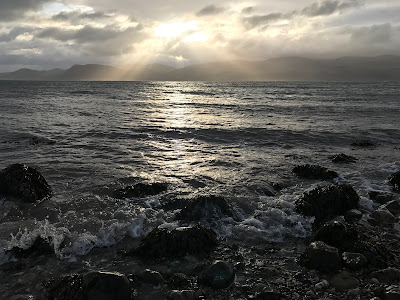 The weather in the morning

When the students got there Lynda did her spiel, and set them on their way. We wandered around a bit, checking how they were doing, and answering questions. This trip tends to be fairly hands-off! The students generally just get on with it. 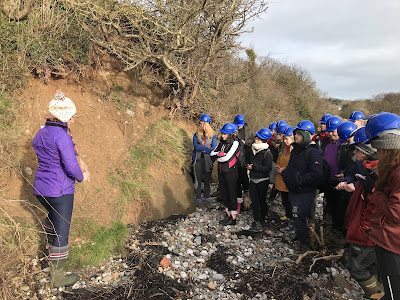 Lynda does her spiel 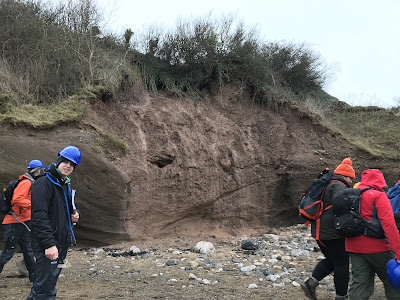 I resisted the temptation to put a section there! 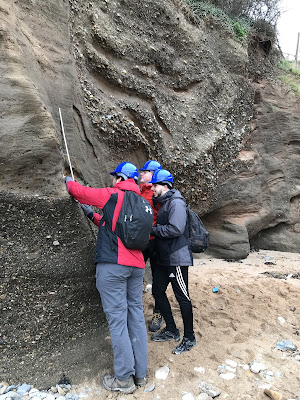 Logging a section next to amazing sediments

It was a bit of a cold, windy and wet day. Not ideal! But what can you do. By the time everyone was done, and Lynda talked them through what they had described, I think everyone was glad to go for lunch.

Lynda and I joined Graham, who had been leading the surveying, in a new cafe. We had some lovely warming food! And then went back for the second round.

The second round went pretty much the same as the first. And at about half past four we were done. And it shouldn’t have been any later; timetabling had given me a tutorial at five. Not ideal! But what can one do. I was back on time. Onwards! And I could leave my field kit ready as I would need that again the day after, and the day after that!
Posted by Margot at 07:50