There was a storm forecast! And these forecasts tend to come true. The weekend was supposed to be very gusty but it would start on Friday. I was stubborn and went to work on bike anyway. But I made sure to leave at about five; the wind would only get stronger so I didn't want to leave it late! And I wanted to be in Neuadd Ogwen (with dinner in my stomach) by seven so I couldn't leave late anyway.

It was getting gusty and rainy while I biked home! I was glad to get there. And when I was in Neuadd Ogwen I heard the wind howl around the building. And I could listen to that same howling later in bed! That's so snug.

The next morning it was OK and I made sure to get my run in. And then I hunkered down and did indoor stuff! And in the evening I lit the fire. Chris popped by for tea. He doesn't have a log fire at home but at least he could listen to this storm while staring into the flames! I had to be a bit careful, though; I had lit the fire, several candles, and an oil lamp but soon my eyes started protesting. Getting out of the room with all the fire sorted that. I think it was the oil lamp! Just candles and a log fire doesn't have that effect. A pity! But a small one.

The next morning, by the time it got light, I could see the river was a raging torrent. Cool! It still didn't get close to the garden but it looked spectacular. And when I later went to the local shop I had to step over sandbags to get in. I had a little chat with the lady at the check-out! I felt like a proper village resident when we chatted about that the water had come in, and that we had heard about fallen trees, fallen power lines and landslides blocking roads. All that happened around the village! And the next day it would still be too windy to bike so I have to use the roads. But I'm sure these trees and power lines will be gone by then! 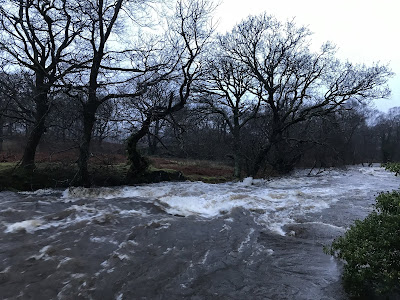 The river in storm mode