We had prepared well for our day perusing the Precambrian to Ordovician rocks east of Cemaes. And not the actual day came! I had left home early it promised to be a glorious day, so I wanted to bike to work. And from work I left with Suzie in the departmental 4WD. We would go to the first meeting point together while Dei and Jaco picked the students up in minibuses.

When we got there, Jaco was already there! Soon Dei appeared too, and we could start. First, Dei would take us all to the beach. Because he could! There wasn't a lot to see other than a quartzite sea stack but hey, a beach is nice. And when we got up from the beach we walked past another melange; a sort of configuration of various types of rocks you get when a subduction zone does some messy eating and crumbs end up in its beard. In a way! We had seen them before on Llanddwyn, but the melange there is unusually pretty. Here it was a bit more mundane. And we spotted a dyke in the rock too. 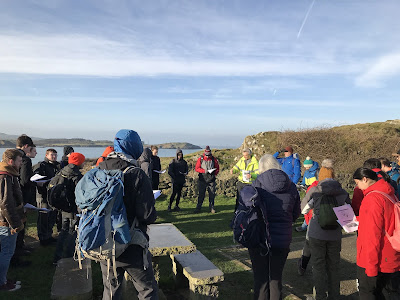 Starting on the car park 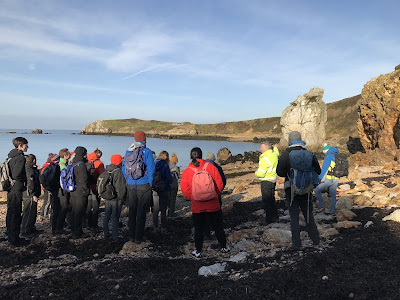 
Then we got to where Dei would say something about the lime kiln there. And then Suzie took over, talking about stromatolites! And from there I talked about the thrust fault you can see in the cliff face on the other side of the bay. And then we were hungry. Time for lunch! Some of us had small look at the cave here; St Patrick seems to have lived in it. The story has he got shipwrecked on a small island in front of the coast and he figured he may well make the most of things and was a local cave-dweller for a while. Now the location has a cute church that bears his name! 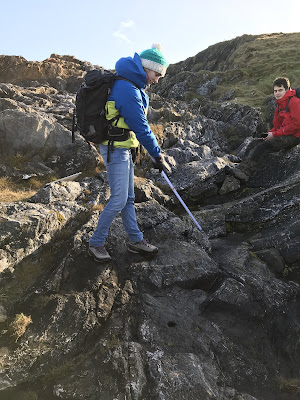 Suzie points out a stromatolite 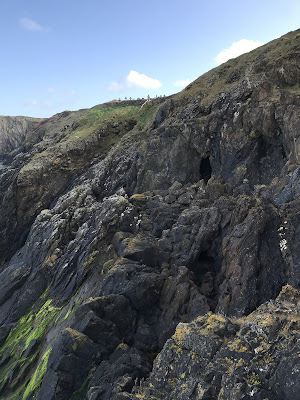 
We went back to the cars for lunch. And then we went to the next location. We had some more unconformities (whether thrusts or not) to look at! Jaco and I were dropped with the students as we couldn't park here. Dei and Suzie parked the vehicles further on. We walked to the ruined porcelain works (I call them brickworks here), and from there we went up to get a good view. Jaco talked about the lithology and had the students draw the headland. And then in the end he talked them through what he thought should be on the drawings! And by then Dei and Suzie had reappeared. 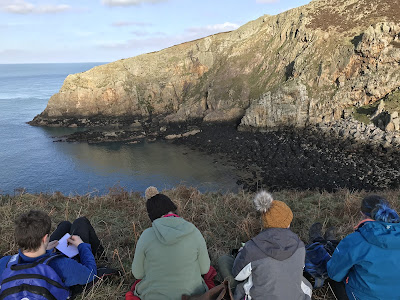 We walked to the outcrop with the conglomerates lying against the quartzites. There I did another spiel about the tectonics, and let Jaco talk about the sedimentology. And by then it was sort of time to call it a day! We did look, as a bonus, at the actual brickworks there, but then went back to the vehicles. Day done! It had been a success! 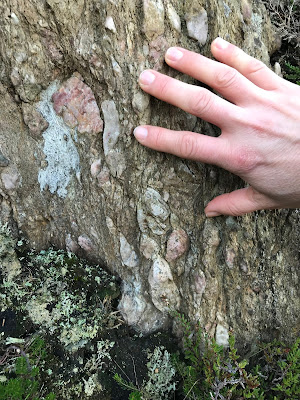 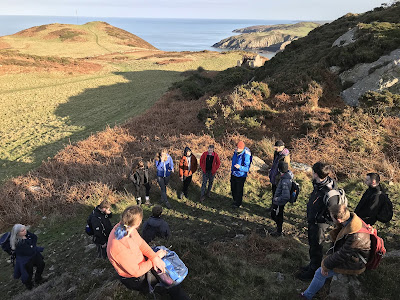 Jaco talks sedimentology with a drumhouse in the distance