Last round of pics?

With now every room in the house in use, I need a lot of pictures to festoon the walls! So I did what probably is a last push in filling these walls. I had had several framing sprees before but well, I have quite some wall space. I had been rummaging through my archive for good pics for a while, so I had amassed a fair few. And then I ordered a whole batch.

The Saturday after the pictures arrived was an Open Day. It was another windy day so I drove in. And that meant I had a car with me on a day I would be done at work during working hours. We send our visitors away at 15:30, so when we have done a debrief and tidied up, it's still before 5. So I went downtown! And found a nice dust basket in one charity shop (the spare bedroom didn't have one yet) and lots of picture frames in the next. And now I have so many I don't think I have to buy any ever again! Well, ever, that's a big word. But now I can have a final framing spree, and organise the pics in some aesthetically pleasing way, and then Bob is my uncle! 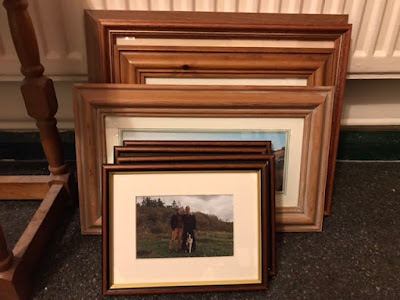 framed and ready to be hung!