There had been a bit of a gap since the first one but our second trip was upon us! And Kate was still in the SRT mood. She had chosen Wrysgan which surprised me a bit; the typical round trip only has a descent down a slab. But there's no need doing the standard round trip! There are more options. I had actually known that since 2013! And even as recently as December we had seen some newly placed anchors. But I'm a bit of a creature of habit and that's why Wrysgan surprised me as an SRT venue.

Initially it looked like it was going to be the same people as on the first trip, but then more were announced; Kate and James would bring three new people. We could be with eight! But Don mailed he couldn't come, Kate/Bob had come back from far away but was otherwise engaged anyway, and the three people pulled out. That may have had something to do with the weather being good! We hadn't had that for a while so I could see why people would want to enjoy that. So in the end, it was actually the same crew as the previous time!

We parked up, with difficulty, as with this kind of weather it can be busy. A forgotten helmet halted us for a bit. And then not one but two pairs of gloves left in a car. We weren't being very executive, but it didn't matter, as it was beautiful weather and it's beautiful there and we were in good company. But we did make it to the entrance. We thought we'd go in and then up the steps, which I hadn't done before. But when we reached them, there was a group of children right above them. Hm! Maybe better wait until they would be gone.

We checked out the bottom of the wormhole. A lot of water was coming down! As expected. We could have gone up there; the children would not venture on that pitch, but it would mean getting quite soaked early on, and with a perennially cold person like James that seemed a bad idea. We went back and saw the children weren't near the steps anymore. So Kate started rigging! And while she was doing that the children walked past us and waited in the same chamber, and an instructor appeared above our heads. And it turned out the children had done an abseil in the next chamber, and needed to come back up here. Oh dear! We were in the way. 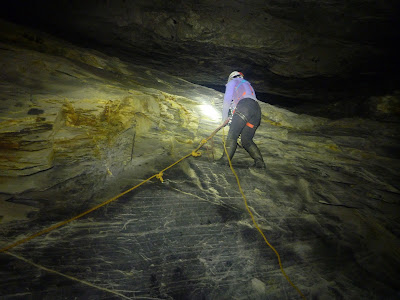 We hurried up and got up the pitch. We derigged and were out of there! And we explored a bit where we ended up; I hadn't gone that way before. And we went further up. And hoped to do a traverse there, but that was being used by yet another group of kids. Bad timing! Instead we stopped for a sandwich. And decided to go out and pop back in higher up. The idea was to go to and through the wormhole and then back out. Kate had not seen it since lugging scaff around for it and was keen to see it again! And we would be close to the entrance so we could just scoot out and be back at the cars before we would get cold. But then Kate began being bugged by an old injury and we decided to cut the trip short. We would just go out! OK with me. We checked another possible entrance, and James started pondering a different round trip, with lots of rope work. Sounds like fun! Looks like we'll be back...

With all that scampering we didn't think of coming up with a name. Oh well. There is no hurry! 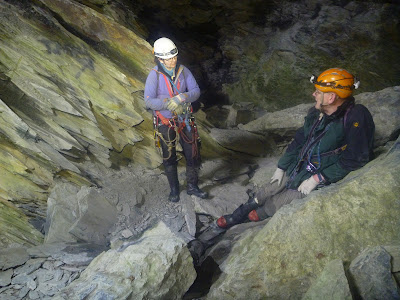 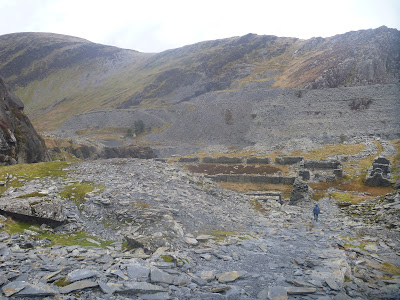