It's sad but I am resigned! I don't think it was a good idea for the UK to leave the EU, but there we are, it's happening. By tomorrow I will be an EU citizen in a non-EU country. I have been there before, of course; Norway isn't in the EU. But there's a difference between never having had something or losing something!

What will the practical implications be? Well, nobody knows, of course. Will the university get into big trouble because the EU citizens are not coming anymore? Will travel be disrupted? Will xenophobia rise? Nobody knows! And what about the EU citizens like me? That's unclear too. I think the UK will tread carefully; if they make life too hard on resident EU citizens, there's little stopping the Spanish doing the same to the plethora of UK pensionados living there. And pensioners tend to vote Tory so Johnson won't want to piss them off. But I can't say I am fully at ease; if the Tories think nothing of taking people's passports away, will they hesitate to take a settled status away? And I know that, quite unlike Shamima Begum, I have the skin colour the government likes, but I also know that said skin colour is no guarantee.

At least there was a cheerful note on the day; we still have our Friday Cake Competition and this time, there was a EU cake! I liked that. Half the school now has blue teeth but that is trivial. Political baker, I salute thee! 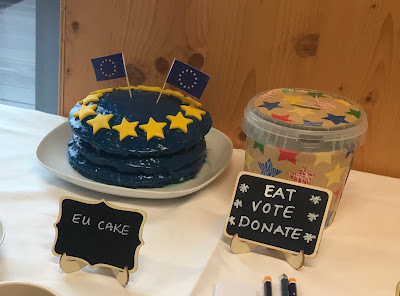