Parys Mountain with the students again

We do our Anglesey geology field trips roughly in chronological order. We had recently done the Precambrian and Ordovician rocks if Llanbadrig and Porth Wen. Now it was time for the Silurian hydrothermal vents of Parys Mountain.

The day before I went on a recce with Suzie, who had missed the previous trips we had done there. And teaching about stuff you see for the first time is hard. We were quick about it: it was crap weather! Luckily, that was the crap weather that had initially been forecast for the actual field day, but which had moved forwards. The forecast for the day after had improved dramatically! Only the morning was still forecast to have heavy rain. So we decided to leave two hours later than scheduled to avoid that.

On the Thursday we left at 11. We drove through some serious showers but when we got there, it was dry! But very windy. Everyone put on all the clothes they had with them. It was a cold wind!

When we got the Big Pit in view all students stopped to take pictures. I was glad they liked it! And at the viewing platform I talked them through the tectonic and temporal setting. And showed them the rhyolite with pyrite in. That was a hit! And then we made our way to the pit. On the side, from where you can see two fault lines (I think) we could pretty much lean into the wind. We didn’t linger!

When we got into the pit, the locked adit door drew a lot of attention. I told the students that the place has its own mine exploration club and that they welcome visitors. I wonder if some of our students will go and check the place out underground! They wouldn’t be disappointed.

We then looked at the central boss, and the sync line, and then sat down for lunch. I was hungry! And after lunch we looked at the black deposits, and with that the geology of the trip was done. Now we would add some bonus history! We left that to Dei, whose family has had involvement in the place for generations. We saw the buildings, calciners, flue, settling ponds, slag heaps, engine house and windmill. And then we had seen the lot! And we were back at the office by half part three. A successful day in the field! But then we’ll step back and go back to the Precambrian and Ordovician, when we visit Rhosneigr. Strict chronology is overrated! 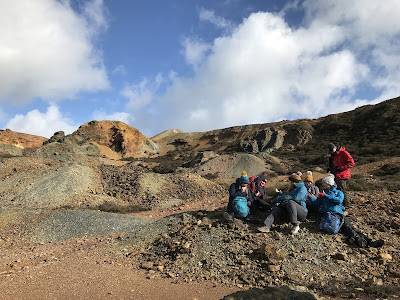 Lunch in the Big Pit 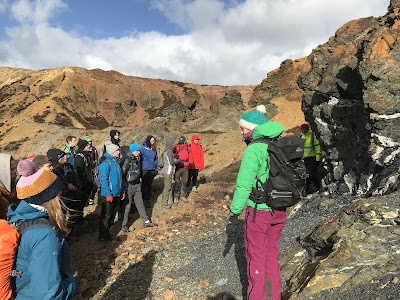